Nigel Edmund was a Vulpesmyrca and a Leporem Venator who appeared in "Bad Luck".

Nigel Edmund was tracking the Bennett family when he took advantage of Peter Bennett having snuck out of his home to meet with his girlfriend, Jeanine Phillips. When Peter and Jeanine heard a noise in the woods, they decided it best that they both leave and head back to their respective homes, but Nigel started playing an accordion to distract Peter. He came out with his labrys in hand, greeting Peter in a seemingly non-threatening way, but soon began chasing him after they both woged. Peter was not able to crawl through a fence in time, and Nigel severed his left foot, causing Peter to bleed out and die. He later was paid $10,000 in cash by Ted Spinelli and Sally Spinelli in exchange for the woged Willahara foot when they met him at his cabin in the woods.

He began tracking and hunting the Bennett family a year before, on March 14, 2014, when he killed Oliver Bennett in a car accident. After Peter's death, Beverly Bennett and Chloe Bennett attempted to flee to Calgary and stopped at the Palms Motor Hotel for a day. Nigel had placed a tracking bug on their car, however, and drove into the lot and watched them enter their room soon after they had arrived. When Beverly left the room to get some snacks, he took advantage of the opportunity and kidnapped Chloe, bringing her back to his cabin in the woods.

Monroe and Rosalee were able to find out that Nigel had a contact at the Redfield Fertility Clinic, Nurse Fran, who recruited buyers of the Willahara feet and set up times for the couples to meet Nigel and pay him the $10,000 cash.

Nick and Hank were able to find where Nigel's cabin was by getting the nurse to tell them about the Spinellis. At the cabin Chloe refused to woge for Nigel, and he was forced to flee from the cabin with her when he sensed that Nick and Hank were approaching. Nick and Hank caught up to him, however, and at first, Nigel used the same strategy he used on Peter with his accordion in order to ambush them. Nigel fought both Nick and Hank fairly evenly for awhile, but Nick was able to dodge a powerful swing of Nigel's labrys, which got lodged in a log. Nigel attempted to run away but was clotheslined by Chloe, who had managed to get herself untied from a stake Nigel had tied her to in the woods. Chloe stabbed Nigel in the foot with the stake, but he knocked her on the ground with a blow to her face, grabbed the stake, and was about to kill her when Hank shot and killed him with a shotgun. 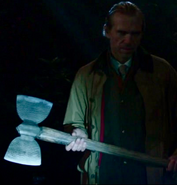 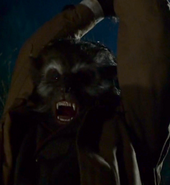 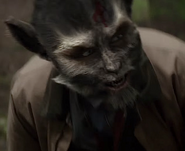 Add a photo to this gallery
Retrieved from "https://grimm.fandom.com/wiki/Nigel_Edmund?oldid=143879"
Community content is available under CC-BY-SA unless otherwise noted.