When woged, females grow fin-like skin on their arms and in between their fingers and toes, with the feet resembling flippers. Gills grow on the sides of their necks, and their fins and gills have a blue iridescence along the edges. Their eyes also glow electric blue. Males, while retaining the fins and gills, have orange or yellow eyes and no colored tinge on their fins or gills. Males also gain sharp, fish-like teeth. When woged, Naiads make squeaks, squeals, and chirps while breathing air through their gills. Naiads keep their legs close together, which makes the limbs resemble a tail fin, and they can swim through the water as fast as a fish.

Naiads must live near a form of water as they suffer from a condition that prevents their sweat glands from being able to produce the oil that retains skin moisture, resulting in extremely rapid dehydration. A Naiad's skin will dry out and peel, and they will die if they do not enter water after about two days.

Female Naiads must conceive and give birth in the water. Male Naiads are born sterile, thus forcing the females to reproduce with other men in order to continue the species.

As their gills are only accessible for use while woged, Naiads in human form can drown just as easily as anyone else. This can be deadly if a Naiad loses consciousness or cannot woge while underwater.

Naiads are extremely protective and loyal to their families. They keep each other's secrets, protect one another, and watch each other's backs. Several have even been willing to die of dehydration rather than give up one of their own.

Naiad society, in the past, may have been one that was patriarchal. Although many Naiads seem to be moving past such a patriarchy, some Naiads that live in more secluded areas, like Alaska, appear to still keep to the "old traditions." These traditions include the cutting of the females when they break their laws. In the act of cutting, one Naiad will slit the telae between the toes and fingers of the Naiad being cut, seemingly stripping that individual of its ability to swim at incredibly high speed. In addition, more traditional males can often be cold and cruel towards females.

Since male Naiads are born sterile, female Naiads must reproduce with other men in order to continue the species. It is something that female Naiads aren't happy about either, but they do so anyway out of duty in order to prolong their bloodlines. Because of this, the males are left to raise a child that is not their own, something that many male Naiads (especially the traditional ones) are not satisfied about. That can result in what the males claim to be a tradition where the males kill whoever the female Naiads sleep with. It is less frequent now, but some Naiads consider this tradition to be more about revenge and letting out their frustrations than about what must be done for the sake of their species. They practice arranged marriages to ensure the continuation of their species.

When it comes to Grimms, Naiads are very suspicious, untrusting, and somewhat fearful, but not so much that they won't fight them if confronted.

The following account is from the private diary of Chief Mate Evan Jones of the Doddington merchant ship:

A strange event aboard the merchant vessel Doddington. Jory, our third mate, disappeared overnight. The rest of the crew grows superstitious.

Recently, Jory had taken to raving about a beautiful woman swimming alongside our ship like a fish. I have decided to stand the man's watch as we round the cape to see if there is any truth to these rumors.

It turns out Jory was no lunatic. I saw the creature known to my kin as the Naiad. After capturing it in a net, I was able to haul the creature on board, where she donned her human shape. I find her mesmerizing and have kept her hidden from the captain and crew.

After some hours on board, the woman's skin began to dry and peel. She begs me to return her to the sea, but I am determined to prove Jory true. I have questioned her regarding his disappearance, but she refuses to betray any secrets of her kind and only pleads to be let back into the water.

At sunrise this morning, the creature died from what I assumed was severe dehydration. I'm afraid whatever secrets the Naiad was keeping have died with her. 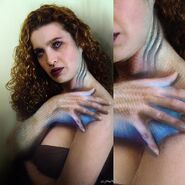 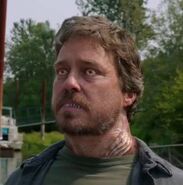 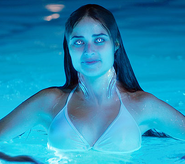 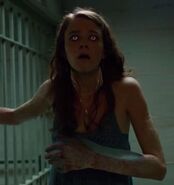 Retrieved from "https://grimm.fandom.com/wiki/Naiad?oldid=198641"
Community content is available under CC-BY-SA unless otherwise noted.