When they woge, the Musasat Alsh-Shabab gains a partial, gray scarab-like exoskeleton over their faces and parts of their arms in a spiral-like pattern. The skin that is not covered by this exoskeleton becomes exposed dermis, the second layer of skin beneath the epidermis. They also gain four mandibles around their mouths and two large, scarab-like jaws, which they can manipulate at will. Their teeth become needle-like, but their hair remains the same in their woged form as their human form.

The Musasat Alsh-Shabab has the ability to use its mandibles to pierce the face of its victims and suck the youth out of them. A liquid substance is collected in two sacs on either side of its cheeks that expand as they are filled, and the substance that is regurgitated is called Yanbue (Arabic الينبوع "fountain"). The victims, meanwhile, will at first appear unaffected, but sometime in the next 48 hours, they suddenly succumb to accelerated aging, causing them to resemble a person in their 90's. The victims age to the point of organ and tissue failure, which kills them. Clusters of these types of deaths have been studied by humans and are thought to be just a medical abnormality or cases of an extremely rare infectious disease. Some in the medical community actually fear that the "disease" could lead to an outbreak if left unchecked, despite not knowing or understanding the vector of the disease.

Musasat Alsh-Shabab are strong Wesen, able to wrestle with Blutbaden and Grimms, if only temporarily.

Some Musasat Alsh-Shabab use their ability to steal a person's Yanbue and make money selling it for cosmetic purposes. They find young victims and either drug or overpower them before extracting the Yanbue. Despite their greed, they are wary creatures, well aware of the effects that Yanbue will have if overused and the dangers of bringing too much attention or suspicion on themselves.

Despite their wariness, Musasat Alsh-Shabab will fight if confronted, even against Grimms. They also are willing to use their mandibles offensively.

I tracked the Musasat Alsh-Shabab through the streets of Cairo for seven straight nights, always too late to catch it. But never too late to discover the victims it left behind. All of them aged beyond their years. One of them, a young man who was, I think, no more than 16 years old because I had seen him before, had been transformed into a wrinkled, old man within a few hours. I knew I had to catch it in the act to understand how it was able to steal the youth of its victims. On the eighth night, I tracked the Musasat Alsh-Shabab to a small back alley. I watched with utter fascination as it woged, and its mandibles pierced a woman's face as she lay limp in its arms. It appeared to suck something from its victim as the cheeks grew ever larger. When it finished with the young woman, it disgorged the Yanbue.

And when it melts into the skin, age disappears, but it becomes highly addictive, shattering lives, and making monsters of those who use it. Knowing how difficult it would be to kill, I lay in wait for him in his room. After I cut off its head, I discovered a small fortune hidden in the walls, but I realized, only too late, that he was only the supplier of the Yanbue. But now that he was dead, I would never know who he was selling it to. 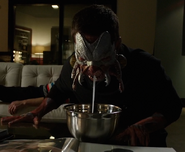 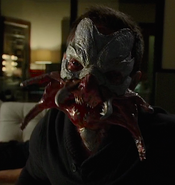 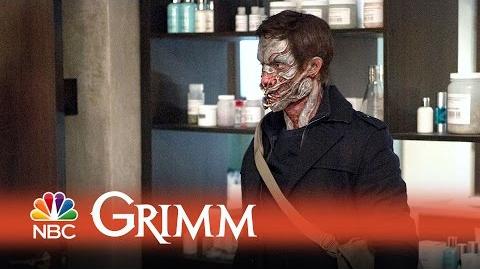 Retrieved from "https://grimm.fandom.com/wiki/Musasat_Alsh-Shabab?oldid=202703"
Community content is available under CC-BY-SA unless otherwise noted.