For the episode, see Mishipeshu.

Mishipeshu is half-cougar and half-dragon in form, and it is capable of entering a person's body and possessing those who are on power quests. It has been more specifically described to have the head of a mountain lion or lynx, the horns of deer or bison, and scales or daggers running along down its back and tail, occasionally with bird feathers as well. It is a powerful creature, capable of easily overpowering humans and even Grimms, who they will not hesitate to attack when they view them as a threat. Mishipeshu has incredible leaping ability and agility as well, but it is slightly limited by the human bodies it possesses, seen when Simon George, possessed by Mishipeshu, jumped from a roof and seriously injured his ankle when he landed on the ground. When those who are possessed look at a reflective surface, they do not see themselves, but they instead see Mishipeshu.

Mishipeshu is not always looked upon as a villain or evil creature, evidenced by the fact that the term "Mishipeshu" has been used in the past as a family name. People also often prayed to Mishipeshu in order to have good fortune when fishing, although help from the Mishipeshu is most useful for medicinal purposes.

Mishipeshu uses the bodies of people whom it possesses to seek its targets. If the body is injured or for any reason can not be used anymore, it changes bodies and finishes its objective. It normally lives in the depths of the Gitchigumi, also known as Lake Superior, but it will go elsewhere to help relatives of the Anishinaabe tribes. The Ojibwe tribes portrayed them to also be master of all water creatures, including snakes. Mishipeshu can be forced to leave a person's body that it possesses by blowing an unknown type of red-colored powder directly in that person's face.

Mishipeshu can at times be a protective creature, and sometimes it can be a vengeful beast and will not stop until it achieves its objective. It typically kills its victims by biting into their throat. Mishipeshu acts cat-like in behavior by how the possessed will lick their hands and forearms to clean themselves, and the possessed also drink water from bodies of fresh water by lapping up the water with their tongues. 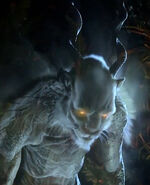 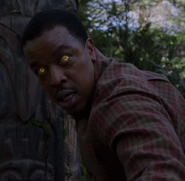 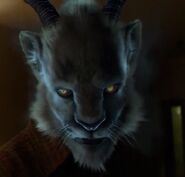