The Mirror Dimension, often referred to as the other place, is a location that is only accessible by going through a mirror portal. This world is primitive and undeveloped, as such technology as a gun is foreign here. It appears to be largely centralized around the Black Forest in Germany. Wesen do not woge, as they do not have a human form, and they prey on all sorts of living creatures, humans and other Wesen included. The struggle between different Wesen and humans is lived every day, with Wesen generally being the rulers of this world. The most dominant Wesen species, such as Blutbaden, Hundjägers, and Coyotl, are at the top of the food chain. Humans use primitive man-made weapons to defend themselves and sometimes are able to use them to kill the Wesen that hunt them, but make no mistake, humans in this world are generally the hunted, not the hunters, and they greatly fear especially superior Wesen.

The creature that all beings answer to above all in the Mirror Dimension, however, is Zerstörer, a devil-like being with a black skull-like face and glowing green eyes that has an extremely intimidating appearance and presence. He wields a staff that grants him enormous power as well. Zerstörer can generally be found at what Eve described to look like a druid temple, with several stone pillars arranged in a circle around a sacrificial stone altar.

These stone ruins are where people first find themselves when they cross over into the Mirror Dimension through a portal in a mirror. For several moments, the other world they were formally in before passing over is visible to them, but this "window" to their former world closes and turns back into a stone pillar with symbols carved into it, the same symbols present on the cloth that the stick was wrapped in. Along with Hexenbiest blood, the stick can be used to open a portal in mirrors that grant access to the Mirror Dimension. The stick can not pass through this portal, however. It is not yet known how to get back to one's former world after entering the Mirror Dimension.

Wesen who enter the Mirror Dimension are slowly forced to involuntarily revert to their Wesen forms. It is not known if this effect is permanent or reversible, but the longer that Wesen reside in this world, the more they begin to woge into their Wesen forms.

Dasha Karpushin used the thought experiment of Schrodinger's cat to explain the existence of the Mirror Dimension to Renard. Just as two different realities exist when a cat resides inside a closed box containing poison, one reality where the cat is alive and another where it's dead, two different dimensions exist simultaneously, the "other place" and the current world back on earth. As long as no one goes through a mirror portal to the other place, or "opens the box," in keeping with Schrodinger's cat, then the two worlds can exist simultaneously as well. Going through a mirror and entering the other place, however, has the potential to close off one of the two dimensions. Dasha went on to say that the notion of death in the other place might be a completely different state of being, such as a pre-life or afterlife.

Further explanation of the Mirror Dimension's existence is possibly explained in Monroe's family bible, specifically the "Wesen version" that dates as far back as 1598. Monroe explained that the "other place" could be analogous to the specific plane of existence that the dead go to after death in Abrahamic beliefs, where hell, or some place similar, is ruled by a fallen angel. The Zerstörer, in this comparison, would be this fallen angel or some kind of devil. In Monroe's family bible, this other place is depicted as a garden that is overrun by beasts where "the fires of hell rage within the beast, not on the land.""Zerstörer Shrugged" 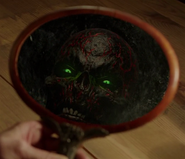 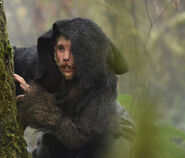 Retrieved from "https://grimm.fandom.com/wiki/Mirror_Dimension?oldid=199719"
Community content is available under CC-BY-SA unless otherwise noted.