A Mellifer (MEL-ə-fər; Lat. mellis "honey" + ferre "to bear") is a bee-like Wesen that appeared in "Beeware".

Mellifers have a pretty severe woge: they develop large, blue compound eyes, their mouths sprout external articulated mandibles, and antennae appear on their foreheads. Like many other species, Mellifers are sexually dimorphic, as male Mellifers have far more pronounced features than females. They are able to concentrate their woge to just their hands and arms.

Mellifers are linked to natural bees and can control large groups of them, using them to provide cover when needed.

The Mellischwuler, or "queen bee" of the Mellifer hive, appears to be superhumanly strong, as one was able to wrestle with a Hexenbiest. It is unclear if other Mellifers share this strength, though one of the illustrations in the Grimm Diaries did show an ordinary Mellifer restraining a Hexenbiest, implying they do.

Mellifers are a communal race who live in small groups ruled by the Mellischwuler with the others acting as her "worker bees." In the Wesen society, they fulfill the role of clarions, sending warning calls within the creature world.

Like real bees, Mellifers operate with a "hive mentality" and live in man-made, human sized "hives." They tend to build those "hives" in the attics of houses, where they harvest their own apitoxin (bee venom). They inject the deadly toxin to their enemies using the Mellifer Stinger, a syringe-like device.

Under normal circumstance, Mellifers aren't aggressive unless they feel threatened. However, when they do sometimes go after someone with the intent to kill, they use coordinated strategies to disguise their attack. Hexenbiests are their sworn enemies, and Mellifers often kill them on sight.

Mellifers also have a tendency to wear yellow or yellow and black patterned clothing, sometimes personalizing some of their belongings as well, such as cell phones, with that coloration.

Grimm: The Warlock Issue 4 depicts Mellifers as capable of powered flight, even though they have no wings.

The human lungs can be refined into a paste and added to pastries. When consumed by a Mellifer, the Mellifer will experience visions of colors and shapes. This may enhance honey producation when administered to an active hive.

They and the Bauerschwein are the only known Wesen who have, or at least had, a good relationship with Grimms. They are openly friendly with them; it’s been suggested that the two are old allies, and Mellifers take it upon themselves to warn Grimms of threats in the Wesen world.

This relationship was possibly severed after Nick allowed the Portland Mellifer queen to die and did not help her when fighting a Hexenbiest, as evidenced by him later being stung by a bee, possibly a sign from the surviving Mellifers of the consequences of what he had done. It is unknown if this extends to all Grimms or just him.

A Hexenbiest mark can be found under the tongue in both human and morphed forms.

Mellifers are bee-like creatures that exist typically as part of a swarm. In group, they operate with a "hive mentality." They live in man-made, life-size "hives," built in the attics of houses where they harvest their own apitoxin (bee venom). Mellifers use natural bees to provide cover when needed and also employ the Mellifer Stinger, a syringe-like device used to deliver their apitoxin. Mellifers are clarions- they can send a warning call within the creature world. Hexenbiests are their only natural enemies.

Mellischwuler: The "Queen Bee" of the Mellifer community, with the others acting as her "worker bees". She leads the hive with a strict code of honor and is very protective of her hive as well as her allies.
The Queen Honeybee:

The Queen Honeybee can be summoned by the Mellischwulers in the most dire of times to fly out and warn of imminent danger. 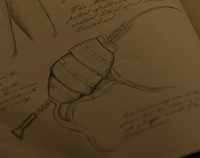 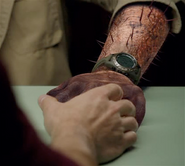 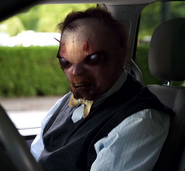 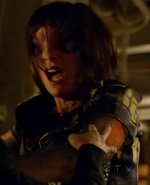