Detective Meachem is a detective working for the Portland Police Bureau who first appeared in "Thanks for the Memories".

He and Detective Pogue were assigned to the decapitation of Weston Steward. When Nick and Hank arrived at Nick's home, they explained to Meacham and Pogue that they were at a wedding and that Theresa Rubel, who was staying at the house, killed Weston Steward in self-defense after he shot Renard. Meacham and Pogue were then about to talk to Trubel, but the FBI arrived, and they joined the FBI as Trubel walked them through what happened.

Later, Trubel went to the precinct and gave a formal statement as Meacham and Pogue questioned her, while FBI agents Chavez and Rosten observed everything outside a two-way mirror.

Meacham and Pogue were assigned to the Jack the Ripper killings and told Renard that they had found their first lead due to the testimony of Judith Nichols, another victim who had survived an attack that night. Meacham told Renard that Judith described the attacker as having a British accent and that she reported that three men, one of which she thought was wearing a police uniform, helped save her. Meacham figured that the uniformed man was a security guard because no one had been arrested.

Meacham and Pogue told Renard that they believed they had found their Jack the Ripper suspect after the discovery of the body of a man named Kenneth Alun Goderich Bowes-Lyon who had a passport from Luxembourg on him. Meacham also added that they found he had the murder weapon. The detectives told Renard that they thought the three guys who had rescued Judith Nichols had gone vigilante and killed the suspect, and Meacham said that a lawyer from Austria had also had called already, requesting to have the suspect's body returned because he was apparently some kind of royalty. Renard told them to do what they needed to do to wrap up the case and complimented them on their work before they left. 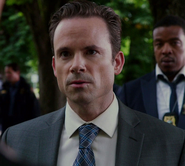 Add a photo to this gallery
Retrieved from "https://grimm.fandom.com/wiki/Meacham?oldid=144154"
Community content is available under CC-BY-SA unless otherwise noted.