When Mauvais Dentes woge, they grow gray fur over the head and arms, and they develop stripes and enormous teeth capable of leaving puncture wounds in their victims up to an inch in diameter. Mauvais Dentes always have to woge with their mouths as wide open as possible to avoid impaling themselves with their huge fangs as they emerge.

They are incredibly strong creatures, able to casually overpower grown men; one was able to kill three men at once and was later shown to be capable of holding his own against two Grimms for a short time. ("Bad Teeth") ("The Kiss") They are highly agile, capable of jumping incredible heights, and are extremely fast, and stealthy. They possess razor sharp teeth and claws that they can use to kill. When they kill, they lacerate their victims and bite their necks. They are also very durable; one was able to take multiple punches to the head without much reaction.

Mauvais Dentes eat humans, or rather parts of them, as evidenced by Marnassier's behavior aboard a cargo ship. It is unknown if human flesh is part of their necessary diet, or if this is simply a bloodthirsty habit.

There aren't many left in the world, but based on the accounts of the Grimm ancestry, they are vicious killing machines with the ability to wipe out an entire village single handedly. They have a reputation for baiting their victims before killing them, enjoying tricking and deceiving their opponents, much like cats. Like Hundjägers, Mauvais Dentes have no qualms endangering innocent bystanders if that would bring them much closer to the designated targets.

A terrifying saber-toothed tiger-like Wesen that is smart, swift and deadly as hell. There aren't many left in the world, but based on the Grimm ancestry, they are vicious killing machines, with the ability to wipe out an entire village single-handedly.

They have a reputation for toying with their victims before killing them, much like a cat does with its prey. When woged, they develop enormous teeth capable of leaving puncture wounds in their victims up to an inch in diameter. 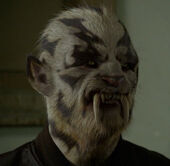 Retrieved from "https://grimm.fandom.com/wiki/Mauvais_Dentes?oldid=202687"
Community content is available under CC-BY-SA unless otherwise noted.