Marnassier was a Mauvais Dentes that appeared in "Bad Teeth" and "The Kiss".

Marnassier arrived in Portland, Oregon in a shipping container loaded in Le Havre, France, on a ship owned by G.Q.R. Industries of Rotterdam, Netherlands. He killed at least two men in the container with him and at least two others after arriving in Portland, including Yates, a security guard, and stole the keys to a pickup truck from him. Later, he escaped from the pier as Nick Burkhardt arrived, using the stolen pickup truck. Afterward, he spoke with Eric Renard on the phone.

Marnassier attacked Nick and fought with him for a couple minutes before running off in the warehouse. He hid and eventually jumped down from above Nick and attacked him again. He continued fighting with Nick until Kelly Burkhardt came to help Nick fight him. Kelly grabbed Marnassier, and when he hit Kelly to get away, she put a knife in his neck, which killed him. 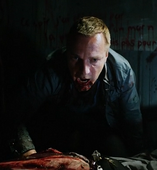 Add a photo to this gallery
Retrieved from "https://grimm.fandom.com/wiki/Marnassier?oldid=198523"
Community content is available under CC-BY-SA unless otherwise noted.