Markus was married 15 years prior to "Volcanalis". He was an archaeologist before his wife was murdered by Volcanalis, and he went off the grid to avenge his wife and warn others about Volcanalis in the mountains.

When Jill Prembrey was near Mt. Hood collecting rocks near a fumarole, Markus tried to warn her that she did not respect "his" property and that she was going to die. He tried to take back the rocks, but Jill pepper sprayed him in the eyes and then drove away. When she fled and he recovered from the pepper spray, he woged into his Taureus-Armenta form.

Later, Markus was in the woods, and Nick found him. When Nick pointed his gun at Markus, Markus woged again. Nick said, "What the hell are you," which led to Markus finding out that Nick was a Grimm, so he tried to flee. He ran for awhile until he was tackled and arrested by Wu. He then warned them the exact way he had warned Jill.

At the precinct, he was questioned by Nick and Captain Renard about his involvement with the death of Jill Prembrey. He told them how he did not kill her and that he was warning people like her to return the rocks, only they never listened. As he rambled on, he eventually said that it was Volcanalis that killed Jill.

Nick, Renard, Monroe, and Markus went to where Jill was collecting rocks and grabbed a bunch to take with them. They set up a trap for Volcanalis at an abandoned warehouse, as they had liquid nitrogen tanks and used Markus and the rocks as bait. When Volcanalis arrived through a manhole on the ground of the warehouse, they waited until Markus was out of the way and then blasted Volcanalis with the liquid nitrogen until he was frozen. Markus delivered the final blow by smashing Volcanalis into many pieces with a sledgehammer and thanked the team while telling them he needed that. 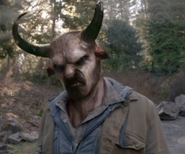 Retrieved from "https://grimm.fandom.com/wiki/Markus_Hemmings?oldid=134260"
Community content is available under CC-BY-SA unless otherwise noted.