Marie Kessler (1958-2011) was Kelly Burkhardt's sister and Nick Burkhardt's aunt. She was also a Grimm.

According to Monroe, in her youth, Marie had a bloody reputation in the Wesen world. His great-grandma's head was cut off and placed on a stick by Marie, to name just one of the frightening stories about her.

Despite her bloodthirsty reputation, she was also viewed as something of a hypocrite by her fellow Grimms for becoming engaged to Farley Kolt, a Steinadler. ("Three Coins in a Fuchsbau") After this rejection by her fellow Grimms, Marie cut off contact with the Grimms and apparently worked alone. ("Pilot") As further evidence that Marie was not as vicious as some other Grimms, she told Nick that their job was to "hunt down the bad ones," showing she did not view all Wesen as inherently their enemies. ("Bears Will Be Bears")

She broke off the relationship with Farley to raise Nick after the car accident that apparently killed his father and mother. ("Three Coins in a Fuchsbau") She was, however, aware that Kelly had survived. Kelly had Marie pick up Nick soon before the accident occurred, and the sisters decided that it was safer for all concerned if the fact of Kelly's survival was kept secret. ("Bad Teeth")

At some point she developed cancer and underwent chemotherapy at a facility in Minneapolis, resulting in hair loss. During this time, she was actively pursued by a Reaper named Hulda.

After many years without much contact, she arrived at the home Nick shared with Juliette Silverton without warning, driving a sport utility vehicle registered in Montana towing a trailer that Nick never knew she owned. She told Nick they needed to talk.

Marie told Nick that he was one of the last Grimms, descended from the Brothers Grimm. She said, "I know you love Juliette, but you have to end it and never see her again. It's just too dangerous." ("Pilot") Shortly thereafter, she was attacked by Hulda, wielding a scythe; Nick shot and killed Hulda. Marie then gave Nick an object attached to a chain from around her neck, and she was taken to the hospital.

At the hospital, Adalind Schade attempted to kill Marie by injecting her with a drug, but Nick intervened. Soon after, Marie regained consciousness.

Marie helped Nick on a case involving Jägerbar. While Nick was busy with this case, Captain Renard again instructed Adalind to try to kill Marie before she could share the information that would set Nick against Renard's group. This time, he told Adalind to hire human assassins. Nick had Monroe guard Marie, as he could not do so while he was busy with the case. Monroe arrived at the hospital and reluctantly guarded Marie.

While Marie and Monroe had a terse conversation about Blutbaden and Grimms, Monroe saw a man stalking Marie's room. He followed the man to the basement and was ambushed by a second assassin. Turning to his Blutbad form, Monroe badly injured the two thugs, pulling off one's arm, so he had to leave the hospital to avoid detection. He called Nick to let him know that he dispatched two assassins but that he could not be sure he got them all.

Just as Monroe left, a man dressed as a priest entered Marie's room and attacked her, but she fought back. Nick arrived in time to see Marie kill the fake priest with the knife she always carried, but her body gave out from the stress, and she died in Nick's arms. Her last words were telling Nick to trust in his instincts and nothing else.

In a flashback, Marie arrived at the Burkhardt family home in an SUV towing the trailer. She and Kelly spoke briefly about what must be done, and Marie left with Nick. Neither Kelly nor Marie told Nick anything about the purpose of his leaving. 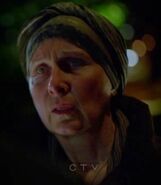 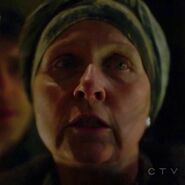 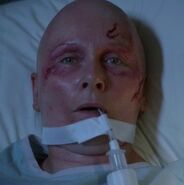