Edit
watch 02:07
Spider-Man: No Way Home Trailer Dropped - The Loop
Do you like this video?
Play Sound

A Manticore (MAN-tə-kor; En., from E.Mid.Per. martyaxwar "manticore", a legendary Persian cryptid) is a half-lion, half-scorpion-like Wesen originating in Persia that first appeared in "The Good Soldier".

When woged, Manticores bear a strong resemblance to Löwens, only they have much larger manes that seem to grow grey as they age. From their spines extend black, chitinous scorpion tails. They are able to move and control these tails and often use them in combat. These tails are capable of delivering powerful blows, and they contain a dangerous poison with high amounts of neurotoxins and nerve inhibitors that are similar to the venom of scorpions of the family Buthidae. This poison can paralyze and kill an adult human, as well as another Manticore, in mere seconds. As such, it is the Manticores' common method of killing. Manticore tails do seem somewhat sensitive though, as a single stab with a knife was enough to cause one Manticore to rear back in pain. However, Manticores are vulnerable to these toxins and can be killed by their own stinger if they are stabbed with it like Juliette did to Jonathon Wilde. ("Maréchaussée")

According to Monroe, Manticores are very difficult to kill. ("Maréchaussée") They are also superhumanly strong on a level impressive even by Wesen standards, as they can easily lift and throw/kick full-grown men across a whole room with great force. They also possess great agility, able to make lion-like leaps over a distance of several yards. Their durability is also impressive, as they are able to take multiple blows from another Manticore. These abilities do not seem to weaken with age, as the elderly Colonel Desai was able to fight with the much younger Jim McCabe on equal grounds. Likewise, the fact Desai was dying of lung cancer and only had months left to live seemingly did not affect his abilities whatsoever.

Manticores are similar in temperament to a Dämonfeuer or a Taureus-Armenta in that they are not afraid of death and view dying in battle as a very noble and worthy death. This, of course, means that they are excellent soldiers, willing to fight for what they believe in. This species can often be found on the front lines of battle with the likes of Steinadlers.

Siege of the Fortress of Ormuz
I first witnessed what I was later to discover was a Manticore while my command laid siege at the Fortress of Ormuz. Pliny the Elder described this Wesen and its famous natural history circa 70 A.D., tracing its origins to ancient Persia. The beast described had a most unusual body, reflected by a physical duality: part Löwen, with skin red as cinnabar, it also had a scorpion-like tail which could protrude from its spine, having a spike-like nail at the end, capable of injecting a great deal of poison. When I attempted to make a move on this Wesen, I discovered there were several more in the ranks. I quickly put away my blade to conceal my identity as a Grimm. I was to learn that they were some of the most lethal soldiers in our command for they have no fear of death. 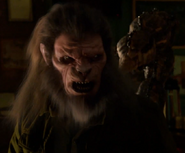 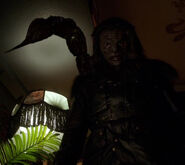 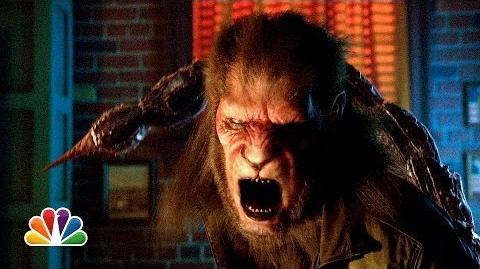