Having been hired by the Dunbar brothers to scare people at the Diamond Lake, things escalated when he frightened Elizabeth and Allan Eiger to the point that Allan Eiger grabbed a gun from his tackle box and started shooting at him. Logan was provoked into ramming their rental boat, knocking Allan overboard, and killing him underwater. As he walked back on the shore, the Dunbar brothers were there asking him what he did. He said he had to kill the man because he had a gun and was shooting at him, adding, "It was sort of like self-defense." Logan then demanded his money, which Wayne gave him, and left.

Logan stayed around the lake and observed the police at the scene. He walked up to Elizabeth Eiger after she had finished speaking to Nick and Hank and told her, "Don't mean to intrude. I heard what happened. Just wanted to say that I'm sorry." He then smirked as he turned and walked away.

Later, Wayne met Logan at a bar and told him he wanted him to kill again that night. Wayne obliged and killed a teen as he was trying to swim over to be with a girl and prove he wasn't scared of the lake monster.

Once again, Logan stuck around to observe police handle the crime scene, but he became angry when he saw how much business the Dunbar brothers were getting at their bait shop. He entered the store and approached the counter, aggressively slamming down a shirt on the counter and questioning Oliver about their raised prices. Oliver called his brother over, and Wayne brought Logan into their back office. Logan angrily told him that he wanted half of everything they were earning, starting the previous day, and exclaimed that they wouldn't have all their business if it wasn't for him. Wayne tried to give him some money, but Logan accused Wayne of taking advantage of him and said he'd be back at midnight to collect the rest of the money, threatening, "If I don't get it, they'll be pulling your bodies out of the lake."

Later that night, Wayne met Logan at the bar to tell him that his brother was planing to betray him and that he'd hired someone to kill him. Wayne confirmed to Logan that he wanted him to kill his brother but to show up early at 11:00 so that they could then take care of his assassin together. Logan then asked who the assassin was, and Wayne suprised him by telling him it was "some girl" and that Oliver thought Logan would never expect it. Logan smiled, thinking it would be easy to carry out their plan.

As Wayne had instructed him to do, Logan showed up at the bait shop early. He pressed Oliver about his plan to hire an assassin to kill him, but Oliver denied doing any such thing. Wayne then sold his brother out and told him he couldn't let him betray Logan. Oliver tried to plead his case to Logan, but Logan wasn't having any of it and pushed him to the ground. He got ready to kill Wayne, but before he could do anything, Trubel entered the store. Logan turned and smiled, mocking Trubel, and Oliver got back up and tried to tell Logan that she was hired by Wayne to kill Logan and that everything had been Wayne's plan from the start. Logan simply dismissed this and woged, only to realize Trubel was a Grimm. He turned to Wayne and said he never had said anything about her being a Grimm, and Wayne just mischievously responded, "Oops." Logan then charged at Trubel, who threw him into a shelf. He wasn't able to land a blow, and Trubel kneed him and then killed him by breaking his neck, finally kicking him to the ground, where he retracted.

The next morning, Logan's body was found in the lake. 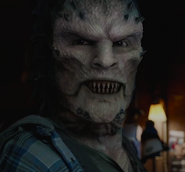 Add a photo to this gallery
Retrieved from "https://grimm.fandom.com/wiki/Logan_Cobb?oldid=162975"
Community content is available under CC-BY-SA unless otherwise noted.