Linus Balouzian is a Huntha Lami Muuaji and the male counterpart of Stacy Balouzian who appeared in "Double Date". Although able to woge to a neutral form and then woge into Stacy, he would talk to her and refer to her as a separate individual, albeit one whom he had been with his whole life.

Linus and Stacy repeatedly targeted and conned single businessmen at upscale bars. Stacy would pose as a distressed, recent divorcee who hated her ex-husband and was looking for an honest, nice guy. She would then bring the victim under the guise of having a one night stand back to her rented apartment, which was designed so that she could leave and re-enter the bedroom through two separate bathroom doors. Once she entered the bathroom, she would get undressed and redress in male clothing, woge into Linus, and he would then barge into the bedroom, demanding to know where his wife was and that he had followed the victim and suspected an affair was going on. He would then take the victim's cash before they fled. Linus was the one with an extensive police record, while Stacy's record was non-existent.

After Stacy pulled the con on Cody Carson and brought him back to their rented apartment, with his phone having fallen out of his coat pocket onto the floor when Stacy took it off and dropped it on some furniture, she went into the bathroom to get redressed and woge back into Linus, who obtained $500 in cash from Cody. Cody realized his phone was missing, however, after he left, and he confronted Stacy, whom he saw leaving as well. She woged and killed him after he grabbed her and demanded to know why she had lied to him about her husband and threatened to call the police if he didn't get his money and phone back.

Later in a motel, Linus argued with Stacy over not leaving out the back door like he told her; Cody wouldn't have seen her, and now the cops were going to be looking for them. Stacy was upset that Linus was blaming her and said that without her, their scheme wouldn't work. Linus told her to get ready and that she was going back out again to run the con that night. He yelled, "No more screw ups," and woged.

After Stacy targeted Monroe at the bar "Olive or Twist", she brought him back to her apartment, not knowing that he was actually running a sting operation along with Nick, Hank, and Wu. As per usual, she led Monroe to her bedroom, took off her clothes, and told him not to move as she went into the bathroom, preparing to woge into Linus. Linus proceeded to burst into the bedroom with a gun drawn, demanding to know where his wife was and threatening to kill Monroe for having an affair with her. Monroe handed him his wallet with only $22 in it, causing Linus to get angry at Stacy again as Nick, Hank, and Wu rushed to the building. Monroe woged and pushed Linus back while he looked at the low amount of cash as Nick, Hank, and Wu entered the apartment. Linus escaped out a window, and Nick started chasing him. Linus found a location to quickly switch back into Stacy, taking off his jacket. Stacy walked away with her head covered just before Nick got there, but he found the jacket Linus had taken off with Stacy's earrings in the pocket.

Back at a motel, Linus and Stacy woged back and forth quickly, arguing about what happened back at the apartment. Stacy said they would pull the con once again, but she would be the one to pick the bar.

Wu was able to separate Stacy from her next intended victim as they left the bar "Los Portales," pretending to need to look at the man's ID because he matched the description of a robbery suspect. Nick soon after confronted Stacy after she left the man with Wu, tossing her earrings he had found at her feet. Stacy said they weren't hers, and Nick asked her if that meant they belonged to Linus because he wanted to talk to him. Stacy denied knowing anyone named Linus, but Hank then appeared and told her that Nick was a Grimm and that they knew she was a Huntha Lami Muuaji. She told them that if she knew what she was, then "you know what I can do," and she woged. Nick shot her with jumbo darts filled with a testosterone solution from his Doppelarmbrust, and after a few seconds, it started to take effect. She fell to the ground, asking them what they had done, and woged into Linus, who was arrested and read his rights.

At the precinct, Linus tried to explain that nobody was supposed to get hurt nor had ever gotten hurt during their con and that Carson was killed because he was really hurting Stacy, and he couldn't stand by and let a man who was also a father and a husband do that. However, Hank told him that there was no excuse for what they had been doing and what they did do, adding that he was going to jail. Linus replied, "Don't you think you've done enough?" He attempted to woge back into his neutral Huntha Lami Muuaji state so he could, in turn, woge into Stacy, but he was unable to do so, much to his horror. He said that he couldn't "find" Stacy, but Nick told him that he had left him with no choice because Stacy couldn't be arrested. Linus reluctantly signed his confession, and Nick told him that he did not know if he would get Stacy back. Nick and Hank then left Linus alone in the interrogation room to pleadingly ask Stacy where she was, saying that he could not live without her. 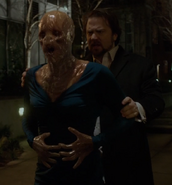 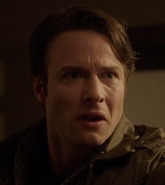 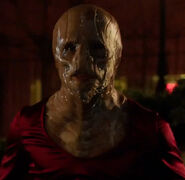 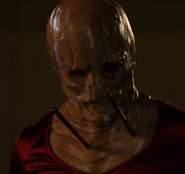 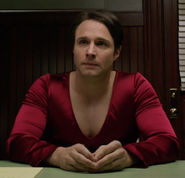 Retrieved from "https://grimm.fandom.com/wiki/Linus_Balouzian?oldid=185822"
Community content is available under CC-BY-SA unless otherwise noted.