Lance B. Calvin was a Blutbad that appeared in "The Good Shepherd". He was a handsome, charming minister with a complicated past who came to Portland, where he started the "Good Shepherd" Church.

He claimed to be a Wieder Blutbad, but he killed two of his church's past accountants. He used them to skim money from donations and then killed them when they figured out his plan. He did so with the help of Megan Marston, with whom he had an intimate relationship. In fact, one of the people the reverend killed was her husband. Megan later became his secretary at the Good Shepherd Church in Portland. Megan conspired with Calvin again in the death of the Portland church accountant, Norman Brewster, but a "wrench" of sorts was thrown into their plans when Norman's hip replacement got stuck in a mulcher in which Calvin had placed his body. Calvin, not knowing this at the time, went to the precinct to report that some of the church funds looked to be stolen by their accountant, who had gone missing. Nick and Hank later returned to the church to question Calvin, who was told by Nick that Brewster's disappearance was now being investigated as a homicide, news that made Calvin and the entire congregation woge. When Nick questioned him in his office, he asked about the similar incident at Calvin's previous parish in Arkansas involving the accountant (Megan Marston's husband), but Calvin claimed that to be an "unfortunate coincidence."

Thinking that it would take one reformed Blutbad to know another, Nick had Monroe enter the church undercover to try to find out if Reverend Calvin's claims were legitimate. Calvin was welcoming towards Monroe and later told him how before he reformed, there had once been a time when he was also involved in the Menschenjagd. Monroe told Nick that Calvin seemed to be what he claimed to be, though he did see him kiss Megan, which he told Nick was very strange.

Later that night with Megan, she told him how she had been questioned but didn't tell them anything. She wanted to leave and run away somewhere with the money, but he told her that they had to see things through because of Monroe's arrival. He planned to kill Monroe and have Megan frame him by placing Norman's laptop with his belongings; Calvin said that he was going to make it look like he killed Monroe in self-defense. However, after Megan found out from a parishioner named Harmony that Lance had cheated on her and was the father of Harmony's unborn child, she ratted him out to the Seelenguter parishioners.

Calvin and Monroe spoke in Calvin's office, and after Calvin handed Monroe a letter opener to make it look like his fingerprints were on the murder weapon, he woged and was about to attack him, but the parishioners entered his office and intervened. One of the Seelenguter, Nathaniel, found Norman Brewster's laptop in Calvin's possession, confirming what Megan had told them, and Calvin then started insulting them, accusing them of not being able to think for themselves. Calvin said, "The meek shall not inherit the earth!" and threatened that it was time they all learned that lesson, but a parishioner, Matthew, pushed him, and the rest of the Seelenguter joined in Matthew's defense and then beat the reverend to death. 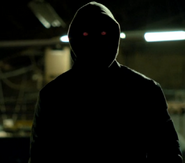 Retrieved from "https://grimm.fandom.com/wiki/Lance_Calvin?oldid=161915"
Community content is available under CC-BY-SA unless otherwise noted.