A Labrys (LAY-briss; from Greek, likely Lydian origin, λάβρυς, lábrys) is a symmetric double-headed, two-handed axe that is typically used by Leporem Venators when severing the foot of a Willahara. It is also used as a melee weapon in hand-to-hand combat.

While the double-headed blades of the Labrys can inflict lethal damage, the blunt end of the handle can also be used to injure and subdue a target. Like most bladed weapons, the sharpness and quality of the axe blades has to be periodically maintained.

After centuries of being victimized by Leporem Venators, this weapon has become symbolic of these hunters for the Willahara species, as Peter Bennett immediately recognized what Nigel Edmund was when he shined his flashlight on the Labrys he was carrying.

Two labryses are stored in the trailer weapons cabinet 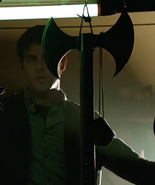 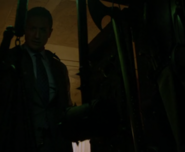 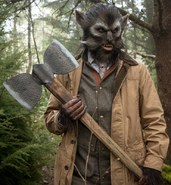 Juliette lights the contents of the trailer on fire ("Iron Hans")

A Grimm wielding a labrys, as depicted in Grimm: Dark Legacy
Add a photo to this gallery

Retrieved from "https://grimm.fandom.com/wiki/Labrys?oldid=196587"
Community content is available under CC-BY-SA unless otherwise noted.