La Llorona, also known as The Woman, The Weeping Woman, or The Melancholy Wife, is a ghost who kidnaps three children every Halloween and drowns them, hoping that their sacrifice can take the place of her original children, whom she also drowned. She usually captures the children from three different points along a river. She then drowns them at midnight (12:00 November 1) downriver just before vanishing for nearly an entire year and reappearing in another location close to Halloween the following year. Her precise nature remains unclear to the many Grimms who have studied her.

La Llorona had been taking children for at least five hundred years, as a Spanish Grimm, who traveled with Cortés, tried to hunt her in 1519. However, he wrote that the story was old, implying she had been around for a lot longer.

Every year she kidnapped three children, traveling from state to state: New Mexico in 2007, then Texas, and then Colorado until 2012 when she reached Portland.

She showed several supernatural powers, being able to teleport from place to place in the blink of an eye and take others with her. She showed a hypnotic power over children, and she also seemed to be quite strong, proving to be a match for a Grimm in combat.

Grimms have been studying her for centuries, as there was a whole section on her in the Grimm Diaries with many different authors, and the text was translated into many different languages. It is possible that La Llorona was the first evidence the Grimms had seen of supernatural creatures besides Wesen.

Three children were taken from the village on All Souls' Eve. The men pulled their bodies from the river, all of them drowned.

I have been told of a woman that steals the children of the villagers and drowns them on All Souls' Eve.

The Locals say she is trying to exchange their children for her own dead children, whom she lost to the river many years ago.

The next passage was written initially in Spanish, translated into a dialect of German, and finally into English:

Having joined Cortes and his expedition, we have now moved on to Veracruz. This is where I came in contact with the woman in the river. There are many stories of her and the children she has taken. I did not believe them at first, but I set out tonight to find out--find out for sure. If I am right, I will return with her head. If I am wrong, I may not return at all.

Three children were kidnapped from their parents a few days before All Souls' Eve.

All the parents said they saw a crying woman taking their children to a path down river.

These innocents were found drowned on All Souls' Day, their lives lost in the river's embrace.

We have to kill this evil woman. 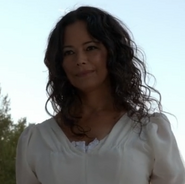 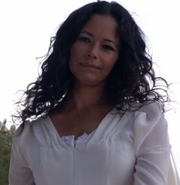