"La Llorona" is the ninth episode of Season 2 of Grimm and the thirty-first episode overall. It first aired on October 26, 2012 on NBC.

IT'S HALLOWEEN IN PORTLAND AND A SERIES OF BIZARRE CHILD ABDUCTIONS LEAD NICK TO A GHOST STORY THAT MAY BE REALITY – KATE DEL CASTILLO GUEST STARS -- Despite the enthusiastic anticipation of the city's residents for Halloween, a series of horrifying child abductions make their way to Portland, quickly spoiling the holiday spirit. Nick (David Giuntoli) and Hank (Russell Hornsby) join forces with Valentina Espinosa (guest star Kate del Castillo, Telemundo's "La Reina del Sur"), a mysterious detective from Albuquerque, to help find and capture the elusive suspect. Juliette (Bitsie Tulloch) joins their investigation, acting as the precinct's fill-in Spanish translator. The more Nick digs into the case, the more he realizes the pattern of the kidnapping matches those in the famed Hispanic horror story "La Llorona," a story with its roots intertwined with his own family's history. Meanwhile, Monroe (Silas Weir Mitchell) celebrates the holiday in fine style as he teaches the neighborhood bullies a lesson. Sasha Roiz and Reggie Lee also star.

The episode starts off with a father, Luis Alvarez, and his son, Rafael, going fishing. Luis sees a woman crying on the river bank, and starting to walk into the river. Believing she is about to commit suicide, Luis jumps into the river to save her. There is, however, no one in the water once Luis emerges, and he sees the woman walking away with his son. He panics and runs after the woman, but she disappears and he is left shouting his son’s name in vain.

Nick is in the trailer. He opens the weapons cabinet and takes out a flail.

Nick arrives at Monroe's lawn, which is filled with various scary Halloween props (skeletons, witches, cobwebs, and a wolf that pops out from the mailbox). Nick is astounded at how seriously Monroe takes Halloween. Monroe replies that Wesen all take Halloween very seriously and, in the old days, they ran around naked in the forest scaring the crap out of villagers -- sometimes, quite literally. Nick is worried about the safety of Portland after that. Monroe installs the flail onto one of the props and shows it to an amused Nick. Nick then receives a call about Rafael's case.

Valentina Espinosa has a dream about La Llorona, where the woman morphs into an ugly ghost in the water.

Wu has trouble with Luis as he hysterically belts out Spanish, which Wu does not understand. Nick and Hank understand the situation in which Rafael was abducted, and they manage to obtain a video of the woman and Rafael taken by a group of kayakers.

Back at the precinct, Nick and Hank report to Captain Renard. Ryan comes in, flustered and stammering, before sending Juliette in as a Spanish translator for Luis. Juliette translates for Luis, as he describes the woman, and his family situation.

Valentina sees on the news that there has been a child abducted in Portland, and is enraged. She woges into a Balam before ordering air tickets to Portland.

Hank and Nick make their way to Luis' house. Luis' neighbors are worried about Rafael too, and one of them, Pilar, tells everyone that she thinks La Llorona took Rafael. Luis doesn't believe in the legend and they argue. Pilar notices Juliette's scar from Adalind's cat's scratches. Juliette tries to avoid the subject, but Pilar successfully guesses everything about Juliette (her coma and memory loss). When Nick returns, Juliette avoids talking about it.

Renard is on the phone. He says that they need to find out if their comrade has cracked under torture, and if he has revealed any names. This shows that Renard may be on the side of the Laufer, and against the Verrat. Valentina enters the room and claims that she is a detective with information on the case.

Renard introduces Valentina to Nick and Hank. She shares everything she knows about the case, which is that three children always vanish on Halloween, always at the same area on each river in the cities they disappear from.

La Llorona sings to Rafael, who is conscious. She morphs into an ugly beast, but Rafael remains unafraid.

Kids who are trick-or-treating visit Monroe's house, where he greets them warmly in a costume of his own and give them sweets. He later sees bullies snatch the bag of sweets away from a little girl. Monroe forces the bullies to give the bag back, humiliating them in the process. They swear revenge.

Valentina and the Portland detectives continue researching on La Llorona. They narrow down on the river where Raphael was taken. Hank thinks that Raphael may be dead already, but Valentina believes that she only kills them after getting all three children. Nick sees Valentina's eyes change to a bright yellow and suspects. Valentina shares the myth of La Llorona with them.

At a Halloween party near a river, a girl sees La Llorona crying and approaches her. She is led away by La Llorona.

Nick and Hank hear of the abduction, and find out that the kid had indeed been taken where Valentina suspected she would.

Renard gets hold of Adalind's information, and finds out that the last place she's been to was Vienna, which seems to worry him.

Wu informs Luis of the second abduction. Pilar looks at him. He starts smashing things, insisting that ghosts do not exist, and retreating to Rafael's room. Pilar confronts Juliette about how she has to choose between two people she loves, which Juliette denies vehemently.

Valentina and the detectives arrive at the crime scene. Renard confronts Valentina, revealing that he's found out that she had been relieved of her detective position 3 years ago. She insists that they find the kids, but Renard orders her brought back into the station. As Nick tries to subdue her, she woges, and finds out Nick is a Grimm. She believes he will kill her, but they assure her not and bring her back.

La Llorona lays the girl down next to Raphael. She asks him about La Llorona's identity, to which Raphael replies "an angel." They both look content.

Renard questions Valentina. She reveals that her sister's child was also kidnapped by La Llorona, and she had seen the weeping woman. The detectives leave her in custody.

More kids come to Monroe's house, and one of them exclaim that they "love this place," showing that Monroe is popular with the kids during Halloween. The bullies hide and plan their revenge against Monroe.

Nick and Hank feel that Valentina is right and a third child will be abducted. They research in the trailer, and find a supernatural being labeled as La Llorona in the books. She is apparently not a Wesen, but something Nick's ancestors never managed to figure out. She had been tracked by Grimms from different families across the globe since 1519. One of them, before embarking on a journey to track her, wrote: "I may never return." Hank notes that that was his last entry ever – apparently, La Llorona is extremely dangerous.

The bullies tamper with the flail-prop of Monroe's, which leads to the flail smashing through Monroe's window. The bullies laugh and run, but Monroe sees them. His eyes woge red.

Nick and Hank break Valentina out to help them with the case. On the way out, they hear on the radio that there has been a third kidnapping. With help from the Grimm Diaries, they manage to deduce the area where La Llorona will kill the kids as being the "Abrazo del rio" or "the river's embrace."

La Llorona brings the kids down to the river bank, where she begs for her own children to forgive her. Three shimmering children emerge from the river, half their faces bloodied. She hopes that the three children she has abducted can take the place of her own. Nick, Hank, and Valentina rush in just before she leads the children into the river.

Valentina and Hank take hold of the three kids, but Nick goes for La Llorona. Nick runs into her but goes straight through her like she’s mist, and lands into the river. He struggles with La Llorona, who is in her demonic form. She drags him down into the water so he can't breathe. Nick manages to grab La Llorona's neck, but she morphs back into a normal woman, slips through Nick's grasp and disappears into the depths of the river as Nick watches, astounded. He then emerges on the surface for air, clearly shaken. The kids don't seem to remember La Llorona and ask for their parents.

The detectives bring the kids back to their parents, where they reunite joyfully. Renard informs them that charges will not be pressed against Valentina, because she helped with the case.

The bullies watch a video of Monroe's window being smashed. Monroe appears behind them and plucks the phone from their hands, and asks them to pay for his window. They retort that they are not afraid of him. Monroe woges and snarls at them, at which they scream and run away. Monroe smiles and murmurs, "Trick or Treat." 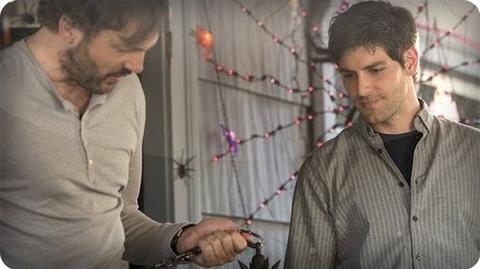