The Löwen Games are the gladiator/fighting ring style fights organized by Löwen. The Games are played in a caged arena; the weapons are medieval. The most common things to use in battle are a morning star and a shield. When one player has the other one defeated (pinned to the floor), the lead Löwen will signal a thumbs up/down. This is a sign of mercy (thumbs up) or death (thumbs down). Once someone enters the arena, the only way out is to win.

A large crowd often gathers to see the fight. When Nick did not kill Dimitri, the crowd got angry and started to rush into the arena. Luckily the police showed up to break up the crowd. The Löwen often recruit other Wesen by capturing them. They then take them "backstage" and put them into a cage. Their pre-fight training includes electrocution to get them angry and a meal of the killed players. 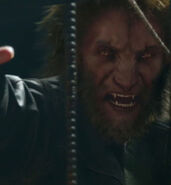 Leo Taymor giving the sign of mercy or death. 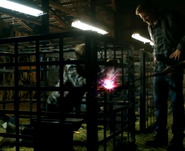 Monroe getting electrocuted before the fight.

Monroe assisting Nick in the arena.