L'esprit ailleurs (lis-PREE ah-yoor; Fr. "mind elsewhere") was the substance that Adalind Schade put into the milk she gave to her cat, Majique, which put Juliette into a coma and caused memory loss in the process. Majique gave the spell to Juliette when the cat scratched her; the spell took a few hours to work.

Ingredients (from the spice shop at NBC)Edit

Mix equal parts Vacciunium myrtillus and trak bark. Bring to a boil. Blend in no more than 1/2 Apium graveolens.

When ingested by a cat, the eyes become completely black and the tongue turns yellow, and the spell is spread to a human victim via contact with an open wound. Several hours later, the human victim falls into a coma, and the human's eyes soon turn completely black. Memory loss then begins to set in. During the time that the spell is spread to the human and the moment the victim is about to pass out, the human does not perceive that anything serious is wrong with them. In titration, the claws of a cat that has received this spell will turn a certain white substance blue. ("Woman in Black") ("Bad Teeth")

The spell took a few (about 2-4) hours to work and made Juliette pass out. 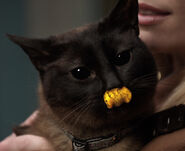 Victim in a coma

Memory loss
Add a photo to this gallery

The memory loss may be slowed using a formula which takes 16 hours to cook and is good for only 45 minutes. Its color fades as it expires. It is administered exactly six drops per eye. ("Bad Teeth") ("The Kiss")

Only the pure of heart may break the spell via a kiss. One without a pure heart may bypass this by using a heart purification potion. The effect of the kiss is instantaneous, but the memory loss that has already occurred to that point is not cured instantaneously and takes time to come back, but only if the victim focuses clearly on one memory at a time. ("The Kiss") ("Volcanalis") ("Endangered") ("Kiss of the Muse")
Retrieved from "https://grimm.fandom.com/wiki/L%27esprit_ailleurs?oldid=133806"
Community content is available under CC-BY-SA unless otherwise noted.