Kronenberg Castle is in a hilly or mountainous area in Vienna, Austria. It is the home and base of operations for the House of Kronenberg. Both Eric Renard and Viktor von Konigsburg had people tortured within the castle in the dungeons.

The castle contains many rooms, including an office area where Viktor spends a lot of his time and where he has meetings with members of the Verrat. In "Synchronicity", Viktor had Gregor Danilov killed in his office by Hundjägers, and later, he appointed Marcus Rispoli as the new head of the Verrat.

When Viktor imprisoned Adalind Schade in the castle dungeon in "Octopus Head", he told her that she could "...huff and puff all you want. You're not gonna blow this house down. It was built for Hexenbiests." This implies that the castle was fortified somehow to resist the powers of Hexenbiests. When Adalind later woged and screamed at her cell door to get it to open, this triggered a loud ringing noise to resonate from the walls of her cell, whereupon Adalind covered her ears as though the noise was painful to her. 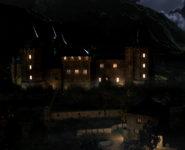 Add a photo to this gallery
Retrieved from "https://grimm.fandom.com/wiki/Kronenberg_Castle?oldid=142251"
Community content is available under CC-BY-SA unless otherwise noted.