"Kiss of the Muse" is the twentieth episode of Season 2 of Grimm and the forty-second episode overall. It first aired on May 7, 2013 on NBC.

A NEW CASE MAY THREATEN NICK AND JULIETTE'S PROGRESS IN GETTING BACK TO HOW THINGS USED TO BE – NORA ZEHETNER ("HEROES") GUEST STARS -- Nick (David Giuntoli) discovers a muse-like Wesen (guest star Nora Zehetner, "Heroes") with the ability to influence those she gets close to - some with positive results, others with terrifying ones. Nick must find a way to get close without losing himself in the process. Juliette (Bitsie Tulloch) arranges a dinner date with Nick in the hopes of clearing the air, but their plans go awry as the case intensifies. Meanwhile, Rosalee (Bree Turner) takes her first visit to Aunt Marie's trailer. Russell Hornsby, Silas Weir Mitchell, Sasha Roiz and Reggie Lee also star.

Juliette is seen reenacting a flashback from "Woman in Black", when Nick is demanding that she go to the hospital about her cat scratch. At Monroe's home, Monroe informs Nick about the veggie steaks he got at the market and that he would defrost one if Nick came back home on time. Nick gets a call from Hank, who tells him that he's back from his vacation and to meet him at a diner to talk.

Hank walks into the diner on crutches, and tells Nick about his not-so-graceful landing while zip-lining. He also tells Nick that he brought his ex-wife Nadine along with him. Just then, gunshots sound from the book store across the street. Since Hank is hindered by his crutches, he calls it in while Nick runs to investigate.

Inside the store, Evan Childs, an author there for a book signing, is dead. Nick hears a voice telling a woman named Khloe that they have to go, that she's his. Nick covers her as Anton starts shooting again, and then runs. Nick chases him in pursuit, and seemingly corners him on an outdoor staircase, only to see him dive into the river.

Back at the crime scene, the detectives question the witness, Khloe Sedgwick, about what happened. They find out that her boyfriend was Evan Childs, the victim, and Anton was an ex-boyfriend. She thanks Nick for saving her and kisses his hand. Anton later crawls out of the river and woges back into human form. Wu tells them they found Anton's loft, so they all head over there.

The loft contains all of Anton's artwork, most of which were about Khloe. The detectives are shocked at the obvious obsession going on in his work. They also find a painting of Evan Childs dead and say that proves premeditation. Nick then receives a call from Juliette, who invites him over for dinner.

At the precinct, Nick shows Hank his drawing of what Anton was.

Nick arrives at Khloe's home to do a follow-up. Khloe tells him of her passion for art, as well as her passion for people "who see the world differently." She then kisses him on the lips and woges into her Musai form. After realizing that Nick could see her for what she was, she becomes very frightened, having not known that Nick was a Grimm. Nick receives a call from Monroe asking about Nick's dinner with Juliette instead of with him. Nick then goes to Juliette's house.

At Juliette's home, Juliette goes to heat up the now cold food, but Nick gets right to the point; what did she want to talk about? Juliette tries to explain that she is remembering him and all that they did together, and that she is apologizing for the way she had been treating him. Nick is clearly distracted, still hearing the hypnotic voice of Khloe. When Juliette wonders if he's okay, he says that work was getting to him and leaves in a hurry, without eating.

At Monroe's place, Monroe asks how the dinner went. Nick becomes suddenly hostile, saying that he doesn't need to be grilled at home as well as work and that Monroe should look into getting his own life, then leaves. After the door closes Monroe mutters, "Maybe you should look into getting your own house." Juliette calls Monroe about whether or not Nick is mad, to which Monroe replies that he doesn't know.

Hank meets Nick at a bar, where he sees Nick drawing a Musai. Hank asked when he saw that and Nick tells him that Khloe is one, though he does not know what it is called. A stranger comes up to Nick and excitedly tells him that his drawing skills are very good and ask if he can show it to his girlfriend. Nick says no, though the stranger asks again. Agitated, Nick punches him in the gut and walks out.

Troubled, Hank goes to Monroe and Rosalee about it. To find out what exactly Khloe is, they have to go to the trailer. After some time searching through the books, Monroe finds an entry matching Nick's drawing. The entry says that the kiss of the Musai is extremely addictive and that, if started with a kiss, the relationship always ends in death. While they are reading this, Anton is splattering paint all over the street in a rage.

The next morning, Nick arrives at the precinct. When asked by Hank, he says that last night was a blur. Hank then tells Captain Renard about all of Khloe's past relationships, all of which involved the boyfriends killing people, killing themselves, or going insane and shows security footage of Anton breaking into a store to steal paint. Wu comes in to report a vandalism, saying that they now know what Anton did with all of the stolen paint.

In the spice shop, Rosalee and Monroe are looking for a cure to the Musai's kiss. The only cure they can think of is real, true love. Just then, Juliette walks in. She needs to go to the trailer again, this time alone. Reluctantly, Monroe gives her the keys.

In the trailer, Juliette has a flashback from "Woman in Black" about Nick explaining Wesen to her and the abilities Grimms have to see them. When she comes back to the shop, she asks Rosalee and Monroe if they believe Nick about what he can see. She feels guilty that she thought he was crazy, but she now believes him. Rosalee tells her about the hypnotic state Nick is in due to the Musai, and that his only hope is Juliette.

At the scene of the vandalism, Nick, Hank, Renard, and Wu overlook the massive street mural of Khloe from a bridge. Nick mysteriously leaves, with Wu running to find him. Hank shows Renard the drawing of the Musai and tells him that Nick could be under her influence.

At Khloe's home, Nick arrives. Khloe says that Anton is also there, and she wants Nick to prove his love for her by killing Anton. The two men begin to violently fight, and the officer standing guard outside comes in along with Renard and arrests Anton. Even though he was arrested, Nick still punches Anton, and Renard has to hold him back while Anton is screaming that Nick can't have her.

With Khloe in police custody, Renard and Hank question her about what she did to Nick. Khloe states that what she did, she has no control over. There's no stopping it. It's just the way she was born. In the precinct, Nick is informed by an officer that Anton has been booked in a cell. Nick walks to the cell and points his gun into it, ready to shoot Anton and claim Khloe as his own.

Before Nick can kill Anton, Monroe, Renard, and Juliette rush in. Renard points his gun at Nick, saying he can't save him if he kills Anton. Juliette steps in front of Nick, telling him to look at her, and that she's there for him just like he was there for her. Nick snaps out of the Musai's influence and hugs Juliette. Renard then stops Anton from picking up Nick's dropped gun, and walks off to the interrogation room.

Inside the interrogation room, Renard says that he's letting Khloe go, but there's a catch; she has to leave Portland and never come back. He says that there's a side of him that doesn't wear a badge and that there's no telling what he'll do. After saying this, he woges to prove his point to the Musai. 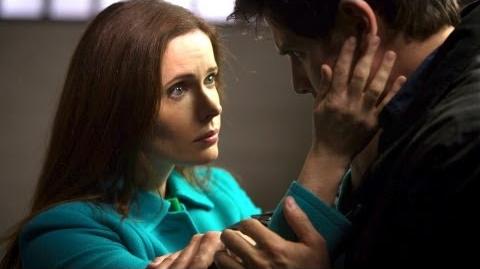 Retrieved from "https://grimm.fandom.com/wiki/Kiss_of_the_Muse?oldid=178797"
Community content is available under CC-BY-SA unless otherwise noted.