Kelly Schade-Burkhardt, or simply Kelly Burkhardt (born 2015), is the son of Nick Burkhardt and Adalind Schade, as well as the younger half-brother of Diana Schade-Renard. He was conceived when Adalind used the potion to disguise herself as Juliette to take away Nick's Grimm powers after they slept together. ("Blond Ambition") Adalind didn't know she was pregnant until Henrietta sensed it and let her know. ("Bad Luck") Soon after breaking the news to Nick that she was pregnant with his child, she revealed she was having a boy. ("Iron Hans") Kelly was named after Nick's mom and he was born via an emergency C-section due to his arm being above his head when Adalind was trying to give birth. ("The Grimm Identity") He currently lives with his parents in their Portland loft. Within 20 years, he develops Grimm abilities and uses them to fight Wesen along with his parents, Diana, and Monroe and Rosalee's triplets. ("The End") 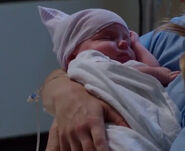 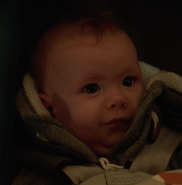 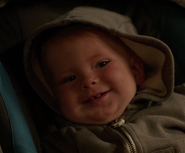