Kallikantzaroi (kahl-lee-KAHNT-zah-roh-ee) is a genetic disorder that affects a small portion of Indole Gentile children.

When an Indole Gentile changes into a Kallikantzaroi, they gain bestial facial features, large pointed ears, fur, claws, and glowing green eyes. They are known to produce a horrendous stench. They are quite fast and fairly strong, able to knock down a full grown man and drag him across a room. They also have an enhanced sense of smell, which they can use to locate other Kallikantzaroi. They seem to be somewhat durable, as one fell off of the roof of a house and got up without injury, and another was hit in the face with a frying pan but got up fairly quickly afterwards. However, they can still be knocked out if they are hit or punched in the face or head.

Much like Krampus, Kallikantzaroi are unaware of their true nature, as they only change at night during the twelve days of Christmas and do not change back until sunrise. This condition is only known to affect Indole Gentile children and is very rare. If Kallikantzaroi are allowed to eat large amounts of fruitcake, they will be cured of their condition at sunrise and return to their natural state.

Kallikantzaroi are infamous for wreaking destruction on Christmas decorations. While they will go for any Christmas decoration, they are particularity drawn to larger, more elaborate decorations, particularly Christmas trees. Despite their seemingly mindless habits, they have been known to employ strategy in their holiday escapades, such as hiding in gift boxes left on their intended targets' front porch and emerging at a later time to let others inside the house.

Kallikantzaroi have an enormous sweet tooth and will gorge themselves on as much fruit cake as they can get. They are not afraid of Grimms, but they can be intimidated by a Blutbad's roar.

In ancient times, it was thought that Kallikantzaroi lived underground during the better part of their lives, sawing away at the World Tree. When winter began, they would surface to wreak havoc for twelve days before returning home, only to find the World Tree had healed itself, undoing their year's labor.

December 1730: I arrived in Dresden at the order of King Augustus II the Strong, having been successful at tracking down and dispatching Kallikantzaroi in the Greek Isles the year before, I suddenly found myself much in demand, but my discovery of what they were was not without its pitfalls. Before my time, it was assumed that Kallikantzaroi were goblins who descended upon cities to wreak havoc during the celebration of Christenmas, but after several bloody decapitations, I was horrified to learn that they were children of the Indole Gentile.

Kallikantzaroi are rare among the Indole Gentile and appear to manifest during pubertas, lasting about 12 days and linked somehow to the bruma.

Now, knowing I was dealing with children, I put away my sword and worked feverishly to discover something that would stop them. King Augustus, however, had found the answer for me. By chance, his mother discovered the Kallikantzaroi were insatiably drawn to sweet cakes. The king ordered the royal baker to create the first stollen, a German sweet cake made with candied fruit. It stood 7 cubits high and weighed 6 stone.

As strange as it sounds, when they overindulge, it renders the Kallikantzaroi harmless, returning them for good to their natural state once the sun comes up. 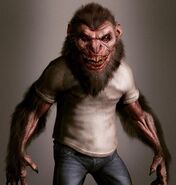 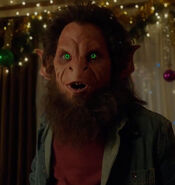 Retrieved from "https://grimm.fandom.com/wiki/Kallikantzaroi?oldid=202360"
Community content is available under CC-BY-SA unless otherwise noted.