Jonah Riken was a member of the Secundum Naturae Ordinem Wesen and the brother of the Grand Master, Charlie. He first appeared in "Wesenrein".

Jonah was the guard watching Monroe while he was being held in a warehouse, awaiting his "trial" from the Secundum Naturae Ordinem Wesen. When Monroe asked for water, Jonah tricked him into drinking vodka, subsequently telling him that Blutbaden don't lie with Fuchsbau and kicking him back down to the ground.

When Monroe started to talk with another prisoner next to him named Terry, Jonah told them to stop talking.

Monroe later woke Jonah up to ask to use the bathroom, and Jonah took off Monroe's ankle chain restraints, telling him not to try anything. However, Jonah angered Monroe by pushing him to the ground, kicking him, and telling him to get up, and Monroe took an item on the ground, woged, and knocked Jonah out with it. Monroe was recaptured, however, and when Jonah woged and threatened Monroe, his brother, Charlie Riken, slapped him and told him that only the tribunal decided Monroe's fate, not him.

Jonah was one of the Secundum Naturae Ordinem Wesen members present at Monroe's trial. He tackled Monroe after he tried to escape during the tribunal, but not before Monroe killed one of the Wesenrein members. Jonah demanded that Monroe be killed, but Charlie said he would stand trial for that murder as well.

Monroe was predictably found guilty of all charges at the tribunal, but before he could be "put to the stake," Nick, Hank, Rosalee, Wu, and Juliette arrived. Along with several other members, Jonah attempted to run into the forest. He encountered Juliette, whom he initially tackled to the ground, but using her newfound powers as a Hexenbiest, she woged and used telekinesis to make the back of Jonah's head explode. 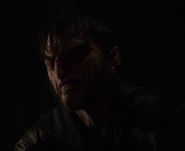 Add a photo to this gallery
Retrieved from "https://grimm.fandom.com/wiki/Jonah_Riken?oldid=150911"
Community content is available under CC-BY-SA unless otherwise noted.