When woged, Jinnamuru Xunte have enormous black compound eyes, grey skin, razor sharp teeth, sharp claws, and fly-like hairs in the place of their normal hair. They have a long, forked, proboscis-like tongue, which they use to lick up the tears of their victims.

Their brains are 1500 grams (3.31 lbs) heavier than human brains, black in color, and are covered in red worms. They possess the anti-bodies for the parasite, so they don't go blind themselves. However, Jinnamuru Xunte do not live comfortably with the worms, as they are plagued by intense migraines. Human tears have an opiate-like effect on these Wesen, so they have little choice but to attack humans in order to deal with these headaches.

Jinnamuru Xunte are capable of moving at incredible speeds, and at times, it almost appears they're teleporting. They are also able to move at slower, but still faster than human speeds. This speed, combined with their impressive agility and flexibility, allows Jinnamuru Xunte to engage Grimms on a close, but not equal level. Their durability is also significantly higher than humans. They're able to jump out of a second story window and instantly run off. They appear to be stronger than humans but are not nearly as strong as Grimms. Like many Wesen, they only possess this strength in their woged state, but they can access their speed, agility, and durability in both forms. Only Grimms are able to hear a buzzing sound that these Wesen produce when they are attempting to move quickly.

Jinnamuru Xunte spray a type of parasitic worm into their victims eyes, which renders their victims blind. The worms are covered in hooks and barbs, which makes them impossible to remove from their victims' eyes. If left untreated, the worms will continue to grow until they completely devour and bore through the victim's eyes. If a Grimm is infected with the parasites, he or she will lose their vision like everyone else, but their hearing is enhanced, and they will retain the enhanced hearing even if they get their eyesight back. The only cure for the worms is to remove an eye from a Jinnamuru Xunte while he is fully woged, which is then mixed in with other ingredients in order to make a cure. One can also slow and even halt the growth of the worms by exposing them to bright light, as the worms require darkness to grow.

According to the Grimm Diaries, the Jinnamuru Xunte feeds off of tears like an opium addict. Furthermore, Jinnamuru Xunte will experience withdrawal effects in the form of even more severe headaches if they don't feed regularly.

Due to their insatiable thirst for tears, they have been known to work as priests and in other positions that frequently deal in high emotion. Jinnamuru Xunte frequently re-visit their victims, targeting family members whose tears are readily accessible.

The only known cure for the Xaliyaa Fingoo infection requires concocting a vaccine using the antibodies found exclusively in the infected Jinnamuru Xunte eye, which must be extracted while the Wesen is still alive and fully woged. The eye must be mashed along with the other ingredients and applied directly onto the victim's eyes.

When I removed his brain from his severed head, I discovered it was swollen, blackish, and covered with vile red worms.

The Jinnamuru Xunte will often revisit his victims targeting their family members whose tears are readily accessible.

Departed London April 16, 1905; arrived in Kenya May 20th, my third trip to the interior where I encountered one of the most fiendish Wesen known on the continent. It took me 14 days but I finally captured the beast who has been terrorizing the villagers.

He blinds the innocent feeding off their tears like an opium addict. The tribesman call him Jinnamuru Xunte, which roughly translates to tear-stealing evil spirit, which I find ironic since until recently he was the local parish priest. 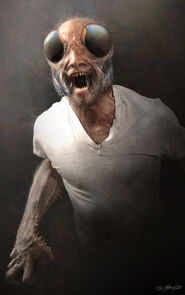 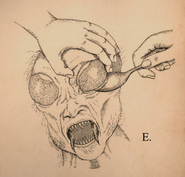 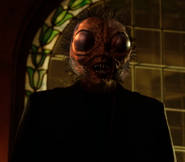 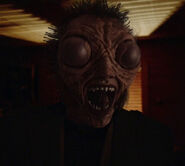 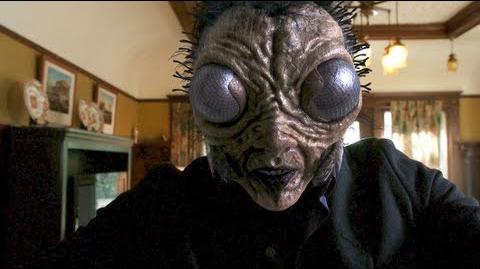 Retrieved from "https://grimm.fandom.com/wiki/Jinnamuru_Xunte?oldid=197745"
Community content is available under CC-BY-SA unless otherwise noted.