Officer Jessie Acker is a former officer and a member of the Secundum Naturae Ordinem Wesen. He first appeared in "Chupacabra".

Jessie was in a patrol car parked outside Monroe and Rosalee's house. He was in charge of keeping watch overnight to keep them safe, and Nick told him to keep a look out as he left with Hank. Later, when Monroe came out to bring him some snacks, Jessie turned to look at him and was wearing a mask representative of the Secundum Naturae Ordinem Wesen. Another man wearing an identical mask then knocked out Monroe from behind.

Jessie appeared from behind a bush, pretending to have been knocked out by someone when Rosalee came out looking for Monroe. He later gave a statement at the precinct to Nick and Hank, sticking to his story that he thought he saw someone and got out of his car to go further check it out, when he was blindsided and knocked out by someone. He acted remorseful for what had happened and took accountability for having messed up what he was tasked to do, though Nick and Hank wondered why he got out of his car instead of just calling it in.

Later, he tried to apologize to Wu as well for what happened, but Wu called him a good cop and told him to go home and get some sleep.

Jessie helped orchestrate the abduction of Bud, who had come down to the precinct and was to be used as a "witness" for Monroe's tribunal.

Later, after determining that he had faked his assault in order to arrange Monroe's kidnapping, the team was eventually able to provoke a confession out of him by tracking down his sister, who had been invited to Monroe and Rosalee's wedding as the plus one of John Oblinger and told Jessie about it. Jessie proved to be quite stubborn in giving up any information, however, as Wu first tried to poke holes in his story of the assault, which resulted in Jessie wogeing and getting punched in the face by Wu when he charged at him. Jessie found out that Nick was a Grimm again afterwards, as both Nick and Renard tried to physically intimidate him into confessing.

Once Jessie's sister was brought down to the precinct, he watched Rosalee question her with Nick standing next to him, who said that whatever happened to Monroe would happen to her. Jessie woged and tried to attack Nick, but he was quickly pinned against a wall, and Nick told him he would watch his sister die if he didn't tell him where Monroe was. Renard then came in and finally convinced Jessie to tell them where he was as Nick went into the other room and escorted his sister out. His confession led to several members of the Secundum Naturae Ordinem Wesen being killed or captured during the gang's rescue of Monroe and Bud, and Jessie was arrested as well and placed in a holding cell. Renard later made a public statement explaining that the organization was a twisted murder/suicide cult and that unfortunately, one of Portland's own police officers was found to be their leader. 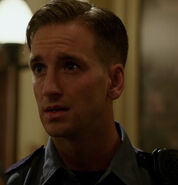