Jerry Baxter is an Eisbiber who first appeared in "Leave It to Beavers". He is the father of Quinn Baxter and the friend of Bud Wurstner.

"Leave It to Beavers"[edit | edit source]

He attended the Lodge meeting called to decide what course of action to recommend to Arnold Rosarot. He was one of the Eisbiber who counseled that Arnold should not step forward and provide evidence, as this would endanger the whole community to the Hässlichen.

When his son, Quinn, went missing, Bud got him in touch with Nick and Hank who were working on the case.

He was one of the wedding guests at Monroe and Rosalee's wedding.

He was one of several Wesen at the spice shop that were concerned about Wesen being targeted by the Wesen Uprising. 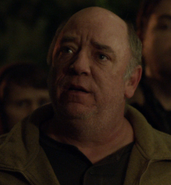 Add a photo to this gallery
Retrieved from "https://grimm.fandom.com/wiki/Jerry_Baxter?oldid=153569"
Community content is available under CC-BY-SA unless otherwise noted.