Deputy Sheriff Janelle Farris is a deputy who first appeared in "Highway of Tears".

She was at the scene of where Dix and Suleka Turner crashed their truck in the woods. Hank and Nick were talking about a piece of wood with nails in it that they found at the scene when she walked up to them.

After a previous case with similarities led Nick, Hank, and Wu to use metal detectors to search the area of that crash for a reptilian figure made of scrap metal, Farris arrived just as Hank discovered a figure. Deputy Farris told them that she found another similar accident from three years ago, so they went to the location of that crash, and Farris found another scrap metal reptile figurine.

The scrap metal pieces led Farris to a salvage yard called JP and Sons, where she asked JP if he could put together a list of buyers of scrap metal, preferably by someone who had come by more than once in the last few years. Nick then called her to tell her about JP and Sons being bought out seven years ago and to be careful. When she hung up, Adesh, one of JP's sons, strangled her with his woged tongue, causing her to black out. JP was upset because she was a cop, but after Adesh reasoned with him that they needed a woman to sacrifice, JP told them to start the sacrifice immediately.

She was thrown in a pit in the scrapyard, but Nick arrived with Monroe, and after Nick got his powers back as a Grimm, he was able to deal with JP and his sons and rescue Deputy Farris.

After the murder of Larry Killburn, she was the first to respond and secure the scene. Nick, Hank, and Wu arrived later and joined her where Larry's body was found. They briefly re-exchanged pleasantries once again, and Janelle then told them, "I'm afraid this case is about as weird as the last one we did together." Janelle surmised it was an animal attack that killed Larry, though she noted that it was odd that the murder happened in the Carver School. She told them that a background check on Larry hadn't been done yet but that the principal told them he did his job, worked there for seven years, and was not very sociable.

They then met with Principal Wiley, where Janelle asked her about any problems Larry may have had at school. Principal Wiley told them about an incident at the beginning of the year regarding racist graffiti being found on a student's locker multiple times, as well as in the boy's locker room, adding that only the custodial staff and herself had access to the school. She informed them that the student's name was Simon George, and he dropped out of school after he turned 18; the last she heard, he had left the foster home he was living in. Nick and Hank decided it would be best to run a background check on Larry and Simon to see if there was a connection between the two, and Janelle then asked if she could come along with them because she believed she knew more information about Simon, citing that her ex-husband was Native American and in the same tribe as him.

Upon running the background check on Larry and Simon back at the precinct, they found that Larry did have a moderate record, and Simon's father was murdered when Simon was only five years old. Janelle remembered hearing about his murder and that his name was Gus George, adding that he was an important member of the tribe. She recalled that Gus was pulled out of his truck and beaten to death in a road rage incident, all of this happening in front of Simon, who was so traumatized he could never talk about it. Janelle said that whoever did it was never found and that it had been presumed that there was more than one killer. Janelle proposed that his tribe might know where Simon is and told Nick and Hank that she'd make a call because the tribe knew her. After making the call, she found out that Simon had moved to the reservation six months ago and that she and Hank were going to have to go there to find out more information (Nick had left to deal with Juliette being arrested).

At the reservation, Janelle introduced her friend, Hector Ballou, to Nick and Hank, informing them that he was a dream reader like his father and his grandfather. They asked Hector about Simon's whereabouts, who informed them that he was in the middle of a power quest. Hector added that Simon had not been very involved with the tribe since he was five years old but rejoined the tribe to connect with his heritage and had come to him for help in preparation for his power quest. Hector hoped that he was connecting with his "spirit guide," and Janelle added that it was usually an animal of some kind. Hector then went into more detail about the nature of Gus George's murder and how there was barely any effort made to find his killers because he was an activist who pushed a lot of issues for the tribe.

Having been advised of a second victim, Janelle inspected his body at the scene and openly wondered if whoever had killed the two men had used dogs, which Hank and Nick went along with as being a possibility. Nick, Hank, Wu, and Janelle then decided to look up the background of the second victim, Declan Henry Burke, to see if there was a connection between him, Larry, and Simon. They ended up connecting them to a third man, Max McClay, and they headed off to his residence.

At Max's house, Nick, Hank, and Janelle slowly approached when they heard a gunshot, and Max was suddenly thrown out a window. Janelle stayed with McClay as Hank and Nick prepared to go inside. Soon after, she saw a creature jump off the roof of the house and run into the woods. She told Nick and Hank that it ran off into the woods and that Max was passed out and to call paramedics. When Hank asked her what she saw, she said she wasn't sure but that it looked like something she had only heard about in stories, advising that they should speak to Hector again.

When they talked to Hector about what they saw, he was surprised and told them that what they saw sounded like Mishipeshu, a mythological creature that is also known as a horned water serpent panther. Janelle wondered how it was possible that they thought they all saw something that didn't exist, and Hector responded that "reality is open to interpretation." He added that Mishipeshu is a being that legend said lives in Lake Superior, which related to Simon's mother because she was Ojibwe. Janelle asked if Hector thought it was possible that Simon could be possessed, and Hector said that anything was possible on a power quest, and to find Simon, they would have to enter the dream world.

Later, in performing the ritual to enter the dream world, Janelle said she didn't feel well, and Hector told Nick to take her outside because she was getting too hot. Hank ran out of the teepee, having entered Simon's past, and Janelle, Nick, and Hector went looking for him. They ended up finding Simon instead, who was injured, and Janelle noticed a totem of Mishipeshu next to him. With the help of Hector, Nick deduced that Hank was likely possessed now, and Mishipeshu would likely be returning to Max McClay's home to finish what it started.

While Nick, Hector, and Simon ran a sting to catch Mishipeshu in Max's house, Janelle kept guard of Max in a police vehicle. She told Max to "shut up" when he asked her what was going on. When they all returned to the car with Hank, Janelle asked what had happened, and Hector told her Mishipeshu was gone. She then asked Hank if he was ok, who said he wasn't and immediately went after McClay angrily. Janelle asked Simon if Max was one of the men who killed his father, and Simon nodded that he was. Hector advised them not to take the issue to court, however, because Simon could be connected to the murders of Larry and Declan, prompting Janelle to say, "It's not fair."

Janelle later became possessed by Mishipeshu and killed Max McClay. She appeared confused when Mishipeshu left her body and she found herself in the woods with blood around her mouth and on her hands and clothes. 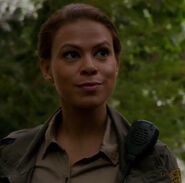 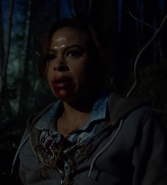 Add a photo to this gallery
Retrieved from "https://grimm.fandom.com/wiki/Janelle_Farris?oldid=151626"
Community content is available under CC-BY-SA unless otherwise noted.