Jacqueline Toboni is an American actress discovered at the University of Michigan in February 2014 by Jim Kouf, who came to speak to her screenwriting class. After doing a table read with some of the students, a few of the performers really stood out. Kouf told them he had a major Grimm role coming up for a young female character named "Trubel" and that if anybody wanted to read for the part to see what an audition process was like, they were welcome to try. Jacqueline had studied drama at the Young Conservatory at the American Conservatory Theatre in San Francisco, but she had no professional movie or TV experience. Her taped reading stunned Kouf.

The producers then had to convince NBC executives and the show’s production company Hazy Mills. Jacqueline flew to Los Angeles to read for the part again, and then to test with David Giuntoli in Portland.

After season 3 filming wrapped up, Jacqueline returned to Michigan and graduated in May 2014 with a Bachelor of Fine Arts degree in Acting. 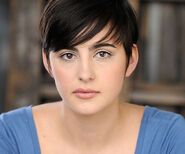