A Jägerbar (YAY-gər-bar; Ger. Jäger "hunter" + Bär "bear") is a bear-like Wesen that appeared in "Bears Will Be Bears".

When they woge, Jägerbars grow brown fur everywhere, including their face. Their features change, gaining bear-like ears, a snout, and fangs. They also gain bear-like claws. They can roar and snarl like bears, suggesting their vocal cords change. They are capable of an extreme woge, as seen in "Bears Will Be Bears" and Portland, Wu.

Physically, Jägerbars are superhumanly strong and very fast, as one was easily able to overpower a grown man of similar build. However, they are weaker than Grimms, as Nick was able to almost casually overpower two while unarmed. They are also able to perform great leaps like actual bears. Additionally, their sharp, bear-like claws are able to leave big imprints in wood. They are good trackers and hunters and possess an enhanced sense of smell, as Frank Rabe was able to track down his son purely by scent.

In ancient times, Jägerbars practiced a brutal and savage ritual called the Roh-hatz to celebrate their young becoming adults. They would kidnap two humans and hunt them like animals.

In the modern era, Jägerbars have found a more civilized role in society. They can easily live among humans and are mostly civil and non-hostile. They can be found as lawyers, clerks, and the like. As such, their more barbaric practices, such as the Roh-Hatz, are rarely performed.

Jägerbars' relationship with Grimms seems reasonably neutral. They neither greatly fear them, nor do they hate them. However, they are still wary of them, particularly if confronted by them.

Jägerbars are bear-like creatures that date back to 900 AD. Jägerbars can live safely in society as long as they stay away from alcohol. Most Jägerbars are politicians and mortgage lenders.

They use a rare Germanic weapon with a carved bear head and a claw-like scoop to disembowel their victims. This weapon is used during Roh-hatz, a coming-of-age celebration of a young Jägerbar from boy to man. 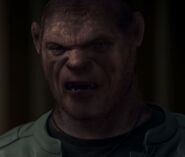 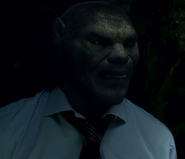 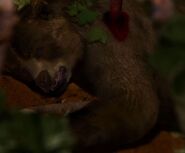