Issue 1 is the first issue of volume 1 of the Grimm comics series and Volume 1: The Coins of Zakynthos. It was published in May 2013 by Dynamite Comics and distributed on May 8, 2013 by Diamond.

Nick, Hank, and Monroe travel to Europe with the intention of rescuing Kelly from the hands of the Verrat. They meet up with Kelly's old friend, Laszlo Dietrich, who is a Resistance leader and a Löwen. Dietrich used to provide Kelly with weapons and food during her visits.

Meanwhile, Kelly is held hostage by Drauz. Kelly fills in some gaps for us in the history of the Coins of Zakynthos. Drauz shows off the bullet that started WWI, blaming it for the Austro-Hungarian Empire, and implying that having a Grimm in their control could have prevented WWI. He is interested only in Nick, however, not her.

Nick, Hank, and Monroe are confronted by several Verrat agents, and become overwhelmed until Maya steps in and kills all of the Verrat. Monroe recognizes she's a Grimm, and they let out a sigh of relief.

Retailer incentive cover.
Add a photo to this gallery 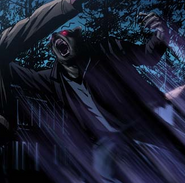 Retrieved from "https://grimm.fandom.com/wiki/Issue_1_(Volume_1)?oldid=188839"
Community content is available under CC-BY-SA unless otherwise noted.