Isidoro Malpica was an El Cuegle who appeared in "El Cuegle".

Isidoro, starting to experience visions of an infant in Portland, searched an online social account full of pictures of the baby he was looking for, Auggie Maler. He then found the address of the Maler family and proceeded to go to the house to kidnap Auggie. While doing so, however, Haley Maler, Auggie's mom, went to check on Auggie after hearing him cry and walked right in on Isidoro standing over Auggie's crib. Isidoro woged and threw Haley into a dresser, causing her to hit her head, as he walked out of the room and left the house with the baby.

The next day, Isidoro looked at a newspaper clipping from an Idaho paper about a man who'd been arrested for murder, before experiencing another vision, this one noticeably more debilitating than the one he'd experienced the night before. He then walked over to Auggie, who was crying on his bed, and woged before he picked him up and tried to comfort him. In Spanish, he told Auggie that he knew he was sick and would get him medicine.

Isidoro went to a mini-mart to get the medicine for Auggie, but he experienced a very powerful vision that caused him to woge and collapse, knocking over several items on a store shelf. This drew attention from people in the store and a store employee, who went over to see if he was okay. Upon seeing his woged form, however, he jumped back in shock as Isidoro ran out with some medicine he'd taken.

Later back at Isidoro's apartment, Nick, Hank, and Wu tracked him down and burst in. He woged and engaged in a fight with the three detectives, but he was eventually overpowered and arrested, with Isidoro recognizing Nick to be a Grimm. Isidoro begged them not to take Auggie and tried to tell the detectives they didn't understand what was going on, but they took him back to the precinct and returned Auggie to his parents. At the precinct, Nick and Hank interrogated him, and Isidoro proceeded to tell them that he kidnapped and consumed babies to prevent them from doing great evil in the future, as he had the ability to see the future with his third eye. He told Nick and Hank that he could foresee that Auggie, on his nineteenth birthday, would kill his parents. Nick and Hank weren't totally buying his story, so Isidoro brought up the name Kenneth Slater, telling the detectives that he was a baby he'd kidnapped in Idaho but was too weak to go through with eating him, so he let him live and found out that last year, Slater killed 10 people. As Nick and Hank left, Isidoro begged them to let him go.

Left alone in the interrogation room, Isidoro's visions only continued to grow stronger, and he started convulsing and foaming at the mouth at the vision of Auggie, now grown up, shooting both of his parents. An officer standing guard outside went inside to check out what was going on, saw Isidoro convulsing, and promptly called for paramedics, but Isidoro then woged and, using his third arm, slammed the officer's head into a table, knocking him out. Isidoro then made his escape and went straight to the Malers' home to kidnap Auggie once again. He broke in just as Paul Maler was trying to lock all the doors, and he chased Haley, who was holding Auggie, upstairs. Haley managed to lock herself in a room, buying enough time for Nick and Hank to get to the home, as they suspected Isidoro was headed straight there. Nick and Hank made their way upstairs and briefly fought with Isidoro, before Nick kicked him over a staircase railing, sending him falling to his death. Before he died, he retracted and said, "The bears. The bears," alluding to the teddy bears on Auggie's blanket, which he had seen Auggie wrap around the gun he used to kill his parents in his prior vision of the future. 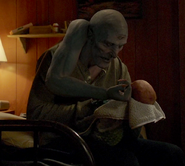 Add a photo to this gallery
Retrieved from "https://grimm.fandom.com/wiki/Isidoro_Malpica?oldid=183631"
Community content is available under CC-BY-SA unless otherwise noted.