For the episode, see Inugami.

An Inugami (ee-noo-GAH-mee; Jap. 犬神 "dog god") is a ghost dog-like Wesen that appeared in "Inugami".

When Inugami woge, they gain a long, white mane around their face, glowing, bright blue eyes, a canine rhinarium that is dark brown to black in color, and larger, black lips. Their hands are unaffected by their transformation. They also have hairless patches of skin around their mouth and eyes.

Inugami are strong and quick creatures, able to casually overpower normal humans and match blows with a Grimm, albeit momentarily. Their prowess is not hampered by age, as demonstrated by the middle aged Takeshi Himura taking on the much younger Nick. They are also quite stealthy and cunning as well.

Inugami are deeply devoted to their traditions of honor. Their fighting capabilities and swordsman skills make them extremely capable samurai-like guardians. If someone saves their lives, they will become bound in servitude and honor to protect both them and their family. Thus, they have a reputation of being near-spiritual protectors. However, said dedication can lead them to take extreme measures, such as outright murdering people if they feel they have besmirched the family honor and/or not received proper justice. Protecting a family that they are bound to is not viewed as a choice by an Inugami but rather as something they have to do, so even if a member of said family directly tells them not to kill, they will ignore them and instead dismiss the individual as being "weak." Their code of honor forbids them from ever harming a member of a family they serve to protect, but if they try to stop them performing their rituals, they will use physical force to remove the family member out of their way if necessary.

Inugami have an especially cruel method of execution. Inugami will kidnap their victims from their home, where the Inugami in question will leave behind an origami dog, and then bury them up to their neck facing northeast towards a river. They will then decapitate them with a katana, upon which they perform a Shinto blessing before capturing their victim, and throw their head under a bridge. This is done to prevent the victim's soul from ever reaching the afterlife, trapping them in a state of perpetual agony. 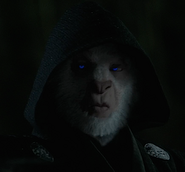 Retrieved from "https://grimm.fandom.com/wiki/Inugami_(Wesen)?oldid=179478"
Community content is available under CC-BY-SA unless otherwise noted.