Ian Montgomery Harmon (born November 5, 1977) is a Fuchsbau and one of the leaders of the Laufer. He appeared in "Cat and Mouse".

Harmon possesses an extensive knowledge of the history of the Wesen world, demonstrated when he explained to Nick a bit about his resistance group and why they stood in the way of the tyrannical group known as the Verrat.

Ian Harmon is not only a leader of the Laufer but is also a renowned journalist from Kennington, London.

Ian Harmon was walking through Washington, D.C., when he suddenly stopped and hid behind a column, wogeing in the process. He ran away, and a Hundjäger that was stalking him soon approached near the same column, sniffing the air. Later in St. Louis, Harmon was holed up in a hotel room, when he suddenly heard a noise and hid outside the window. The Hundjäger from New York was there, who Harmon disarmed and killed. He then escaped before Edgar Waltz entered.

He fled to Portland by bus, using a fake ID that said "Lester Cullum." After being followed there and shot by Waltz, Harmon ran to the spice shop, which was now operated by his ex-girlfriend, Rosalee, but was previously operated by Rosalee's deceased brother, Freddy. As Rosalee worked to clean the gunshot wound, Monroe appeared. While asking about the veracity of Harmon's story, it was revealed that Rosalee and he had been involved with one another years ago.

He later insisted that he had to leave, on the grounds that merely being with him was enough to put both Rosalee's and Monroe's lives in danger, but Monroe informed him that they knew someone who can help. Rosalee told him of the Grimm, Nick. Ian was skeptical, but Monroe pressed on, saying that Nick only hunted down Wesen who were a threat to society and that he even went out of his way to help Rosalee after her brother's death. Ian initially thought that this Grimm they talked about took bribes in exchange for service, until Monroe pointed out that this was not the case, for Nick was a cop, and a homicide detective at that. Ian relented and finally agreed to accept assistance from Nick.

When Nick arrived, he initially tried to arrest Ian for the murder of Quinn, but Monroe and Rosalee verified Ian's alibi that he had been in the spice shop when Quinn was killed. Nick then agreed to help Ian by catching the real murderer: Edgar Waltz.

Ian then went home with Monroe to recover.

When Waltz threatened to kill Rosalee, Monroe, Nick, and Ian returned to the tea shop, where the three of them disarmed Waltz. Ian killed Waltz to protect Monroe and Rosalee. Nick then appeared to have arrested Ian, but he dropped him off instead near the bus station, with money and the false passport Rosalee had gotten for him from Reginald. After Nick told him to get out of the car, Harmon asked what he was doing, and he explained that he was also protecting his friends and that if Harmon went to trial, they'd be killed. Nick then told him to never return to Portland. As Nick drove off, Ian looked after him in amazement. 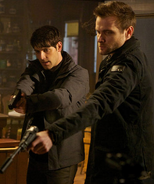 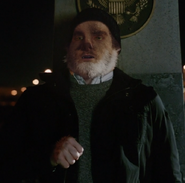 Retrieved from "https://grimm.fandom.com/wiki/Ian_Harmon?oldid=175450"
Community content is available under CC-BY-SA unless otherwise noted.