A Hundjäger (HOOND-yay-gər; Ger. Hund "dog" + Jäger "hunter") is a vicious, hound dog-like Wesen that first appeared in "Cat and Mouse". They are the Verrat's main enforcers. Hundjägers are fast, clever, cold, and calculating, making them ideal for professions like assassinations and bounty hunting.

Hundjägers have a quite severe woge. They grow thick brown fur over their heads and bodies, long canine ears, a dog snout, and razor-sharp teeth. Although it becomes part of their fur, the imprint of their hairline is still visible. Unlike many Wesen, there doesn't appear to be any obvious differences in this form between both genders. However, there are some variations in the species, as some have black markings on grey fur and a pink nose, similar to a Mauvais Dentes. In addition, those variations include a less pronounced dog snout and longer, more visible, pointy ears.

Hundjägers are excellent trackers, as they have the ability to track prey over enormous distances and often hunt their prey across whole continents relentlessly. Like several other canid Wesen, such as Blutbaden and Fuchsbaus, they possess an enhanced sense of smell, though not one as great as Blutbaden. Their enhanced sense of smell is stronger in their woged form than their human form. ("Cat and Mouse") ("Headache") They also don't seem to be nearly as strong as Blutbaden since they generally rely on firearms to intimidate, subdue, or kill their targets, and Monroe was able to relatively easily overpower one on three separate occasions, not even needing to woge in one of those instances. However, as a few of them were willing to attack Nick unarmed, they may have some strength enhancement. They also appear to be somewhat faster than humans and can kill grown men with ease. ("Season of the Hexenbiest") Like Coyotl and Fuchsbaus, their teeth are sharp enough to sever flesh, and they sometimes kill with them. Hundjägers can suppress their woge to just their eyes, which turn a noticeable shade of gold, as seen with the female Hundjäger who tried to kill Tavitian. ("Twelve Days of Krampus")

They're very tenacious when they are on the hunt; they will let nothing stop them from finding their target and will even randomly kill people if they believe it will help. An example is when Edgar Waltz followed Ian Harmon from St. Louis to Portland. However, they have a great belief in the sanctity of the rules, such as in the case of the Freidenreden.

Because of their reputation, they are widely feared among Wesen, even by Blutbaden. However, in "Cat and Mouse", Edgar Waltz was surprised and perhaps even afraid when he discovered that Monroe was not a Fuchsbau as he originally thought, but a Blutbad, suggesting that the feeling is mutual.

Due to both having worked for the Verrat, Hundjägers regard Grimms not as friends but as convenient allies.

Hundjägers were the enforcers responsible for mass executions of renegade Wesen during the Second World War, a notable example being their infiltration of the Spanish army and monarchy during Franco's regime.

It's rumored that they eat their mothers from inside the womb.

In the comics, Hundjägers are depicted with black fur instead of brown and red eyes instead of yellow.

I attempted to take down one of these beasts alone, but was quickly surrounded by four more. I fled to rethink my plan.

The primary skill of this Wesen is to eviscerate his victims using his powerful jaws and sharp teeth.

This snarling beast is known to work in packs and can be easily hired or persuaded to hunt down any target for the right price. He should never be trusted with information and usually resorts to violence over common sense. 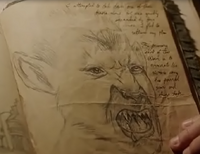 Hundjägers are a vicious, hound dog-like Wesen. Hundjägers are fast, clever, cold, and calculating. I mostly encountered them as paid assassins, to be said. They are excellent trackers, as they have the ability to track prey over enormous distances and often hunt their prey across whole continents relentlessly.

Hundjägers are fast and will always try to get physical. Their agility allows them to attack while moving closer. Beware of their swipe attacks for your can can end on the pavement.

Retrieved from "https://grimm.fandom.com/wiki/Hundjäger?oldid=202275"
Community content is available under CC-BY-SA unless otherwise noted.