The homeless man is a vagrant who has been periodically victimized by Wesen. Despite having seen some fully woged, he does not understand the Wesen world. He first appeared in "Natural Born Wesen".

The homeless man lived in the abandoned industrial building where Cole Pritchard, Krystal Fletcher, and Gus Campbell hid out and cached their weapons. He had seen them woge, and at least one of them had threatened to cut out his tongue.

Duncan Fargo was going to crucify him as part of an old sacrificial rain ritual in Fuilcré tradition, but Nick, Hank, and Wu arrived in time to save him just before Fargo was about to gore him. He was freaking out over having seen Fargo fully woged and thought he was a demon, but Wu told him that "adrenaline can do crazy things to perception." 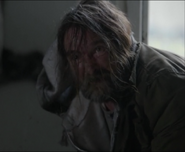 Add a photo to this gallery
Retrieved from "https://grimm.fandom.com/wiki/Homeless_Man?oldid=156509"
Community content is available under CC-BY-SA unless otherwise noted.