Hofmann is the man hallucinated by Adalind. He was first heard in "Octopus Head" and first seen in "The Last Fight".

While Adalind sat in her cell, Hofmann removed a small piece of masonry from the wall, and a patch of light shined through the hole. Adalind asked who was there, and Hofmann chuckled. She asked who he was but only heard more chuckles. She then said, "I know you're there. Please talk to me. My name is Adalind." Hofmann replied, "My name is for me to know and you to find out," followed by some more chuckling. The hole was then covered.

Hofmann looked through the hole in Adalind's cell and offered to show her a way out. He said to her, "Six stones in, three stones high." Adalind asked what that meant, but Hofmann only laughed and repeated, "Six stones in, three stones high." Adalind found the stone, pushed it, and crawled into a larger room as the stone closed behind her. Hofmann told Adalind his name and asked if she wanted to find her baby. She hesitantly says yes, and he told her that it would be a treacherous journey and that she'd need her strength, so he handed her a small box with a brownie in it to eat. Hofmann heard dogs barking and told her that they had to go, and he led her down a tunnel out of the cell.

Hofmann led Adalind up a twisting wooden staircase in Kronenberg Castle. She asked where they were going, and he told her to be quiet so she won't wake "them." She said that they didn't have to be quiet because no one was there, but as she spoke, a face appeared out of the stone walls and said he knew where Adalind's baby was. She asked where, and Hofmann urged her not to speak to it. More faces appeared and said they knew where her baby was as he tried to get her to keep moving and not listen to them.

As Adalind was about to drown in the tears of the faces in the wall, she emerged back in the dungeons, wondering how she got there. Hofmann appeared and told her that he had said not to wake them, adding that she only heard what she wanted them to say. He then tried to get her to keep moving, but she heard a baby crying. He told her not to go back there, but she did not listen and ran towards the sound.

As Adalind ran in circles through the castle, she opened a door and saw herself holding a platter with Hofmann's head and rats on top of it. Hofmann said that he knew she just wanted her baby, and Adalind started screaming.

Later, Hofmann helped Adalind off the floor, telling her that he told her not to go back. He then told her not to stop when she entered a room and that once she reached the door on the other side, she'd be free. Adalind asked how to open the first door, and Hofmann told her that he was the key. Hofmann's laughter was then heard as Adalind turned around and only saw a key on the floor. 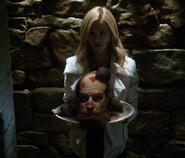 Add a photo to this gallery
Retrieved from "https://grimm.fandom.com/wiki/Hofmann?oldid=140805"
Community content is available under CC-BY-SA unless otherwise noted.