A Hexenbiest (HEK-sən-beest; Ger. Hexe "witch" + Biest "beast") is a witch-like Wesen that resembles a corpse, with visibly decaying flesh. They first appeared in "Pilot". The term is reserved for the females.

A Zauberbiest (TSOW-bər-beest; Ger. Zauber "magic" or Zauberer "wizard" + Biest "beast") is a warlock-like Wesen. The term is reserved for the males.

When they woge, unlike many other Wesen, Hexenbiests still appear human; however, their skin decays so that it resembles a corpse, their teeth sharpen, and their hair may turn gray. Their woged appearance becomes more decrepit-looking as they age. Interestingly, Hexenbiests find this decayed look sexy. When a Zauberbiest woges, their skin appears more aged and wrinkled than their female counterparts, and their eyes entirely turn a glowing red, almost as if they are hot embers.

Woged or not, they can be identified by a dark U-shaped birthmark on the underside of their tongues.

Hexenbiests and Zauberbiests are shown to be among the most powerful Wesen in the series due to their many powerful abilities. They are shown to possess superhuman strength. They are able to casually overpower a grown man and rip him apart, but they can only access these powers in their woged form and not their human one. Hexenbiests are not as strong as Grimms, as on three separate occasions, Grimms were able to gain the upper hand in a fight with them. However, Hexenbiests are physically powerful enough to give Grimms a degree of trouble. ("Love Sick") ("The Kiss") ("Face Off")

They also possess other abilities, such as telekinesis, demonstrated when Adalind turned the gun of one of the Verrat against him at a distance. ("The Show Must Go On") They can be somewhat pyrokinetic, as Adalind's daughter, Diana, lit up a fire in the fireplace at the cabin. ("Once We Were Gods") They can create illusions, as Diana caused Meisner to bring firewood to the cabin after he thought he actually picked her up in the middle of the forest, and she did the same thing at Nick and Juliette's home, where she made it look like she was alone on the bed until Juliette picked her up and saw she only picked up a pillow. ("Once We Were Gods") ("Synchronicity") Elizabeth Lascelles has shown the ability to temporarily freeze people in time, but it's unclear if all Hexenbiests possess this ability or not. ("Octopus Head") Hexenbiests have a sixth sense: they can "smell" and identify magic using their noses. ("The Last Fight") They also have the ability to harness seductive powers on others who are within their immediate proximity. ("Bad Luck") Hexenbiests have been shown to have the ability to fuse human cartilage together ("Star-Crossed") and put someone into a comatose state with a gas that they breathe. ("Into the Schwarzwald") However, it is unknown if all Hexenbiests have the cartilage fusing and gas breathing abilities, as Eve is the only one that has shown these powers. Conrad Bonaparte, who is a Zauberbiest, was able to painfully turn Adalind into stone by touching her hands. ("Set Up") Full Zauberbiests also possess the power of telekinesis and can even mess with the mind of an individual and create illusions. ("The Beginning of the End")

Hexenbiests who are "created" (as a Verfluchte Zwillingsschwester potion side effect for example) are more deadly than normal Hexenbiests. ("Tribunal")

They are also particularly known for their knowledge of Zaubertränke, chemical or alchemical concoctions and potions. These are used to many effects, such as bewitching a person, and have many highly emotive, compulsive, and/or deadly effects. It has been suggested that skilled Hexenbiests have an innate ability to make Zaubertränke with how they know exactly how much or what percentage of a particular ingredient should go into preparing them, and it is rather dangerous for anyone other than a skilled Hexenbiest do create a retrograde inversion of Zaubertränke because of the possibility it may result in betäubende wirkung (buh-TOI-bin-duh VEER-kuhng; Ger. "numbing effect"). ("Mishipeshu") Their abilities are not limited to just Zaubertränke, however, as Catherine Schade owned a key that could open any door, and Elizabeth used a two-headed black and red snake to revive Sean Renard after he flatlined. Hexenbiests, rather than Zauberbiests, are particularly skilled in the making and using of Zaubertränke.

If a Hexenbiest ingests the blood of a Grimm, their Wesen part will be destroyed and they will become a normal human. The weakness is common knowledge amongst Hexenbiests but seems to be closely guarded from outsiders. Hexenbiests have the ability to detect a former Hexenbiest who has had her powers removed this way as well. ("Mr. Sandman") Since Adalind was visibly shocked when she realized that Nick knew about it, it seems that even Grimms generally don't know about this vulnerability. A Hexenbiest turned human in this way still retains her knowledge of Zaubertränke and can still create the most dangerous of concoctions. However, stripping their powers clearly has some affect on their ability to make Zaubertränke, as Adalind claimed she could not create a cure for Renard's obsession due to Nick stripping her of her Hexenbiest powers. ("Face Off") Destroying the Wesen part of them will cause some of their Zaubertränke to stop working, but this will not occur if the Hexenbiest is killed. ("Love Sick")

The only known way to regain their lost powers involves the still beating heart of another Hexenbiest, after which the Contaminatio Ritualis must be performed by the former Hexenbiest. They must cut off the hands and feet and pluck out the eyeballs of the dead Hexenbiest. Then, they must take them to a special field and bury everything in a certain place, the last bit being buried with their own hands. If they are accepted, all the flowers in the field in a large hexagon will die, and they must then pick all the dead flowers. After this, the flowers must be placed inside the dead Hexenbiest's body, and the body must then be sewn up. After a period of several hours, it must be slit open, and a red sludge will ooze out. Said sludge must be collected and then rubbed onto the stomach, and if the Hexenbiest performing this ritual is pregnant, it must be rubbed onto the abdomen throughout the remainder of her pregnancy. ("Goodnight, Sweet Grimm") ("The Ungrateful Dead") ("PTZD") ("Mommy Dearest") There is a way to suppress a Hexenbiest without the blood of a Grimm. To make the suppressant, the liver, gall bladder, tongue, and four ribs of a dead Hexenbiest, that has not recently died, are some of the required ingredients, and the Witch's Hat is needed to strain the boiled mixture. Then once the Hexenbiest drinks the mixture, they will start to violently convulse and their spirit will rise out for a short period of time before entering back into their body. Once their powers are suppressed, their woge will be a tiny ripple and their telekinetic abilities will be limited. ("You Don't Know Jack") The suppressant's effects don't last forever and will eventually wear off. ("Clear and Wesen Danger") When the suppressant starts to wear off, the Hexenbiest will experience sharp stomach pain and a woge ripple across their face, along with uncontrollable telekinetic abilities. ("Into the Schwarzwald")

Seemingly concerned only about their own beauty and popularity, they have been known to do things, such as apply leeches to the face, to make their skin paler. They work at the command of royalty and are extremely loyal creatures, but they are only loyal to whomever they serve, as to others they are treacherous and manipulative, even to their own kind. Adalind has commented that Zauberbiests are not known for being altruistic, and the same can also be said of Hexenbiests. Both Hexenbiests and Zauberbiests find power to be very appealing as well. ("The Believer")

When dealing with Hexenbiests, it is important to not get on their bad side, as they seldom forgive and are capable of exacting their revenge in multiple ways that never end well for their offender(s). Zauberbiest tend to be even more sadistic than Hexenbiests and will even terrorize their own kind if they feel it will help them reach their goals. According to Rosalee, it is not normal for a human to fall for a Hexenbiest. This implies that despite their attractive human forms, Hexenbiests either fail to maintain human behavior in their relationships, or humans are somehow able to sense their true nature unless the Hexenbiests use deliberate manipulation. However, they are able to reproduce with humans and have half-breed children, as Sean Renard is proof of such offspring.

They are feared throughout the Wesen community and are not above bullying weaker Wesen. Even Monroe has seemed worried about dealing with Hexenbiests. It seems as though they are known for telling lies, as Kelly Burkhardt was surprised that Catherine Schade told the truth to Nick, ("Bad Teeth") and Stefania Vaduva Popescu confirmed that Adalind's baby was a Royal and didn't take Adalind's word for it even though she was only a former Hexenbiest. ("Volcanalis") They are the only natural enemy of Mellifers. ("Beeware")

Hexenbiests also have a particular affinity for cats, often using them as vectors for spells or potions that they conjure. Adalind used a cat in this manner when she fed it L'esprit ailleurs in its milk, and it later scratched Juliette's hand. ("Woman in Black")

Witch-like creature that somewhat resembles a demon or goblin. They work at the behest of royalty and are identifiable by a dark birthmark under their tongues.

A miller fell slowly but surely into poverty, until finally he had nothing more than his mill and a large apple tree which stood behind it. One day he had gone into the forest to gather wood, where he was approached by an old man, whom he had never seen before, and who said, "Why do you torment yourself with chopping wood? I will make you rich if you will promise me that which is standing behind your mill."

"What can that be but my apple tree?" thought the miller, said yes, and signed it over to the strange man.

The latter, however, laughed mockingly and said, "I will come in three years and get what belongs to me," then went away.

When he arrived home, his wife came up to him and said, "Miller, tell me, where did all the wealth come from that is suddenly in our house? All at once all the chests and boxes are full, and no one brought it here, and I don't know where it came from." 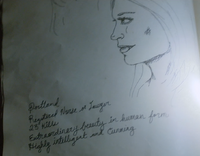 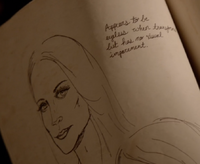 Hexenbiests have a frightening relationship with felines. They seem to favor the little creatures or slaves to their spells. A charmed cat can inflict much damage on those the Hexenbiest sets them upon.
I observed two Hexenbiests charming a cat through a demonic invocation I shall not repeat for fear I might conjure the devil myself by doing so.

A Hexenbiest mark can be found under the tongue in both human and woged forms. 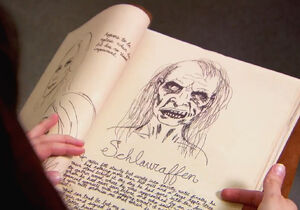