Henrietta was a Hexenbiest who first appeared in "Death Do Us Part". She was an old friend of Elizabeth Lascelles and was one of the main reasons why Elizabeth moved Sean Renard and herself to Portland.

Renard wrote down Henrietta's phone number for Juliette to get in touch with her to see if Henrietta could help her with her Hexenbiest situation. Renard told Juliette to memorize the number because soon after it was written down, the numbers scrambled.

When Juliette called Henrietta, Henrietta told Juliette that she was looking forward to meeting her. Henrietta gave Juliette an address to write down for where to meet and told Juliette to remember it. Soon after Juliette wrote the address down, it scrambled on the paper like Henrietta's phone number did.

Once Juliette arrived at Henrietta's house, Henrietta told her she believed that they had a lot to talk about.

At Henrietta's house, Henrietta asked Juliette to woge so that she knew what she was working with, but Juliette said she wasn't sure how to. Juliette closed her eyes and tries to woge, but Henrietta told her she was working too hard. Henrietta then woged, which caused Juliette to woge as well. After they both reverted back, Juliette asked Henrietta if she could help her. Henrietta told her maybe, but it would be challenging. She told Juliette she must practice her woge and learn to control it and that it would be wise not to tell Nick about the situation because his natural instinct would be to take Juliette's head off. Henrietta then took some of Juliette's blood and put the blood into a flask where she put multiple things with it. She swirled the flask after putting a cork on the top. Henrietta told Juliette that it had to syncretize and she would call when she had something to show her.

After the cork on the flask popped off and foam oozed out, Henrietta called Juliette. Henrietta showed her a hole that the substance made through the table and floor, stating that she had not seen anything like that before and didn't know how far down it went or if it even stopped. Henrietta then told Juliette that that was what happened when the syncretization didn't syncretize. Juliette asked what that meant and Henrietta told her that it showed how powerful she was, angering Juliette, who said that she said she didn't want this. Henrietta told her she didn't have a choice and she was what she was now. She told Juliette that there was nothing they could do to change that. Juliette then woged, causing things around the house to rumble. Henrietta hit Juliette in the face and told her she must learn to control herself because witches used to be burned at the stake.

Nick went to Henrietta's house to ask her why she told Juliette that her being a Hexenbiest was permanent. She explained to him that because his blood was in Adalind, and because of what she did to Juliette, the blood of a Grimm would not make her human again. She then told him that killing Juliette would be the only way to stop her, or he could accept her as a Hexenbiest like she accepted him being a Grimm. Henrietta then advised Nick to keep his distance from Juliette while she figures out her current situation. She then emphasized the latter point by showing how easy it was for her to use her seductive abilities on Nick, nearly kissing him, adding that she was not nearly as powerful as Juliette would become.

Adalind later arrived at Henrietta's house as well, eager to know what Henrietta presumably taught Juliette to allow her to wield her powers so well, so quickly. Henrietta simply congratulated Adalind as she was able to sense she was pregnant. Upon realizing that Adalind did not know what she was congratulating her for, she told her she was going to have another baby. She then laughed as Adalind started to realize that this was indeed possible and who the father was.

Sean called her to let her know that he needed to see her right away and that it was urgent. When he arrived at her home, she asked him what was wrong, and he showed her his bleeding gunshot wounds. Henrietta asked Sean if he had been shot again, and Sean told her about his recurring bleeding from his old wounds that had supposedly healed. Henrietta asked if anyone else had seen this, and Sean told her no one had and that he had gone to see a doctor and had an MRI and a CT-scan, both of which had not found anything wrong. Henrietta tried to calm Sean down as he was telling her that there was definitely something wrong with him; she asked him if he had been having any dreams, and Sean answered yes and described to her how he had been reliving the moment he was shot, as well as a dream where something is reaching for him. When he told her about his blackouts, Henrietta asked him where he is when that happens, but Sean didn't know, only that he kept waking up in strange places, always around water, and he didn't know how he got there. When Sean asked her if she could help, she answered that she didn't know and that it would take some time. Sean yelled that he didn't have time and got up to leave, adding he didn't even know why he had come. As he left and closed the door behind him, Henrietta tried to get him to stay to no avail, saying she needed him to come back.

Some time soon after Renard left, Henrietta was hurriedly looking through a book when she suddenly heard a back door to her house unlock. She woged as she heard footsteps approaching, but the mysterious intruder quickly approached her and slit her throat with a knife, killing her. The killer then started singing an Irish folk song about the Devil as he walked past her body.

After Sean told Nick, Hank, and Wu that the last place he went before returning home was Henrietta's, they all went to her home, only to find her body on the floor where Jack the Ripper had left her.

Henrietta was quite powerful, capable of moving numbers and letters that were written down without being near the area. She also demonstrated her ability of telekinesis, when she opened her front door to Juliette ("Death Do Us Part") and when she pulled blood up into a jar from Juliette's arm. ("Maréchaussée") She showed her seductive abilities on Nick when he came in to confront her about Juliette, and she was also able to sense that Adalind was pregnant. ("Bad Luck") 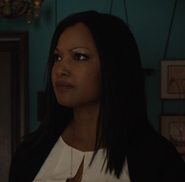