The detectives and Harper conferred about the two women who died of massive bee venom injections. After Nick read that a Hexenbiest has a distinctive mark on her tongue in both human and woged forms, he asked Harper to see the tongues of the two female victims. Harper showed him the tongues, which bore the marks.

The two detectives conferred with Harper, who told them that Faith Collins was murdered by asphyxiation.

Harper told the detectives that, in spite of appearing to have died from an attack by rats, Paul Lawson died of heart failure. She then showed them the contents of a rat's stomach, which contained fibers that were not in Lawson's vehicle.

Nick, Hank, and Harper talked about how Steven Bamford died. Harper said he died from drowning because he was low on blood (about 1/4 the blood he should normally have). They found needle-sized piercings on his neck, and Harper thought it could be part of a satanic cult popular in the 1980s. Regardless of what caused the needle marks in his neck, they ruled out that the case was an accident and that it had to be a homicide.

Harper discovered that Ryan Showalter had been forced to ingest a corrosive acid that destroyed his internal organs from the inside. She determined that the substance was related to spider venom. She also stated that the liquefied organs were removed through an incision that resembled a bite mark.

Harper examined the body of Sam Bertram and confirmed that he died of a toxic reaction after swallowing three gold coins. She touched the coins briefly and fell under their compulsive spell. Later, she was captured by Soledad Marquesa and interrogated about the location of the coins. Once he found out what he needed to know, Soledad pistol-whipped her. Later, Hank and Nick received a report that she was in the hospital but in good condition. (Harper was referred to as "Parker" throughout the episode.)

She was seen briefly talking to Nick and Hank about Carl Stanton, the Reinigen. The disease was not airborne, she said, but she still wanted blood tests from both Hank and Nick, just to be safe.

Harper was called in to check on Kelly and confirmed that the same worms were infecting her eyes and that they had completely eaten her eyeballs.

Harper studied the skin fragment Nick had found and told him it was human with animal properties causing its luminescence. She identified the enzymes in the skin as luciferase.

The body of Lilly O'Hara was on the autopsy table, and Harper was just about to make the first incision when Lilly woke up. This (understandably) shocked Harper, and she backed away from the table.

She detailed the injuries suffered by Scott Himber to Nick and Hank. 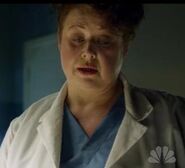 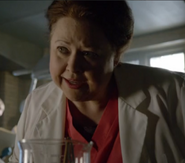 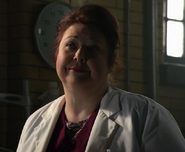 Add a photo to this gallery
Retrieved from "https://grimm.fandom.com/wiki/Harper?oldid=172463"
Community content is available under CC-BY-SA unless otherwise noted.