Hap Lasser was a Blutbad that appeared in "The Three Bad Wolves".

His home was destroyed in an explosion, which he managed to avoid being killed in when he went to retrieve a shake weight he accidentally sent flying out the window.

This happened a month after another explosion destroyed the home of his brother, Rolf, while Rolf was inside. After Hap was taken in for questioning by Nick, Monroe responded to a call made earlier and came to pick him up, promising to keep him safe in his (Monroe's) house.

Things started off well until Hap's sister, Angelina, arrived to also protect Hap. That very night, Angelina's feelings caused her to push Monroe into leaving Hap in the house alone, while the two had some fun in the woods all night.

A regrettable decision it was, as the next morning, Peter Orson came to the house in the guise of a delivery man and shot Hap, killing him. 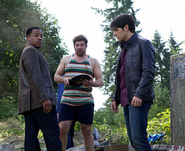 Retrieved from "https://grimm.fandom.com/wiki/Hap_Lasser?oldid=172339"
Community content is available under CC-BY-SA unless otherwise noted.