Hans Tavitian is one of the leaders of the Resistance that was first mentioned in "Stories We Tell Our Young" and first seen in "Twelve Days of Krampus".

He personally leads his own group of Resistance fighters called the Resistencia Maquis. He has united the Ceux De La Resistance Nord with his own group after he settled his disagreements with their leader, Lucanus, that resulted in latter's death. As a result of the merger, Tavitian has taken control of the south and changed some alliances within the Resistance.

In the Austrian Alps, Tavitian was driving when he was stopped by the police on the road due to an accident ahead. He started shooting them, knowing they were Verrat. He took down everyone at the scene, including a female Hundjäger who tried to retaliate.

Tavitian arrived at the Resistance's meeting place and was greeted by Sean Renard, Meisner, Frenay, and other members, who informed him of Breslau's betrayal. Tavitian flaunted his hatred of the Royal family unabashedly, piquing the interest of Sean.

At the Resistance's meeting, members expressed their distrust of Renard due to his lineage. They heatedly debated for a while, before Tavitian asked Renard to say something. He stated his understanding of their distrust but assured them that his blood gave him access to the people needed and that he understood Wesen in a way they could not. Finally, he won them over by reminding them that he had a Grimm. After no one dared to contradict him, they decided to leave the area because it had become unsafe.

He called Sean Renard's cell phone and asked him if he recognized his voice. Renard said he did, and Tavitian said they needed to meet and that he was already in Portland. Renard told him to meet him at 9:00 PM at the intersection of Southwest Morrison and Park and hung up.

At the meeting spot, two men signaled to Tavitian that Renard had arrived, and he got out of his car and sat down in Renard's front passenger seat. Renard put his gun down on the arm rest, and Tavitian began to talk about the rumor going around that the Resistance was in possession of "a very important child." Renard said he'd heard about that, and Tavitian asked him if he'd heard that the Resistance took the child right from Prince Viktor in Portland. Renard then admitted that he gave the child to Viktor because he had no other choice, but Tavitian replied that he knew Renard had no intentions of letting Viktor leave with her. He asked where the child was, and Renard answered that she was with the Kelly Burkhardt, the Grimm he hired. He asked Renard why he didn't tell the Resistance that he knew about Kelly Burkhardt, and he said it was because the Resistance had been betrayed by a mole, noting that Adalind had barely escaped Europe. Renard told him he needed to find out who the mole was, and Tavitian asked him, "How do I know it wasn't you?" Renard responded that if it had been him, both he and the child would have now been with the Royal family. Tavitian then told Renard that the Resistance was going to find the child and that Renard was going to help them. 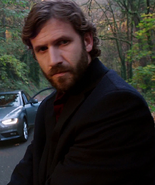 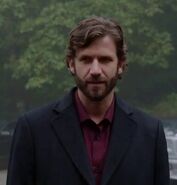 Add a photo to this gallery
Retrieved from "https://grimm.fandom.com/wiki/Hans_Tavitian?oldid=177605"
Community content is available under CC-BY-SA unless otherwise noted.