Graydon Ostler is a Bauerschwein chef who appeared in "A Dish Best Served Cold".

He was a celebrated, award-winning chef and restaurateur who trained at Le Cordon Bleu in Paris and the ICC in Munich. He had recently returned from Europe to open the Raven & Rose restaurant in Portland. A food critic said, "Raven & Rose is the shining star in his (Ostler) expanding food universe."

Ostler opened up a restaurant called Raven & Rose in Portland. Nick and Hank went to the restaurant to investigate after a couple of people had their stomachs explode, and their only connection was that they ate at the restaurant shortly before their deaths. Ostler gave them all the information they requested, including what the victims ate at the restaurant. Later, one of Monroe's friends went missing after eating at the restaurant, and Juliette told Nick that everything sounded similar to gastric dilatation volvulus, which is a severe bloat. Rosalee said she had heard about it and did research at the spice shop to discover that the exploding stomachs were being caused by ingesting cooked Völlige Verzweiflung, which is a mushroom found in the Black Forest. It has a similar effect to Ophiocordyceps unilateralis, which is a rare strain of fungus. It causes carpenter ants in the tropics to climb trees, where their stomachs explode, spreading the spores. Nick confronted Ostler about the mushrooms to try to get him to confess to the murders. Ostler wouldn't do it because he and all the chefs who worked for him had lost people close to them at the hands of Blutbaden. Later, when Ostler closed the restaurant for the night, Monroe followed him and led him into a trap, where Nick and Hank confronted him to get him to confess as numerous Blutbaden started surrounding them and approaching, threatening to eat Ostler. After making it look like Nick had shot Monroe, Nick and Hank threatened to abandon Ostler as more and more Blutbaden gathered around them, and Ostler finally became scared enough to confess to Nick and Hank. He was taken to the precinct where he signed a written confession. 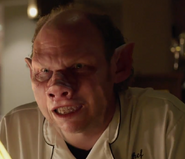 Add a photo to this gallery
Retrieved from "https://grimm.fandom.com/wiki/Graydon_Ostler?oldid=183325"
Community content is available under CC-BY-SA unless otherwise noted.