Genvieve is a Fuchsbau also formely known as the "bearded lady" for Carnival Metamorphosia. She appeared in "The Show Must Go On".

"The Show Must Go On"Edit

At Carnival Metamorphosia, the crowd watched inside the main tent as Hedig, the ringmaster, showed off his four acts: Genvieve the Bearded Lady, Damien the Last Dragon, Ivan the Strongman, and Maxmillian the Wolfman. All four used their Wesen abilities under the guise of magic tricks, thrilling the audience.

After the show, Max went back to his tent. Genvieve asked if he was okay and suggested that they leave the Carnival Metamorphosia, as they had promised they would do when they first joined. Max started drinking and reminded Genvieve that they needed the money and had no where else to go.

After Nick and Hank later came to the carnival to question people about the murders of Monica and Dolores, Genvieve attempted to ask Max if he knew anything about the murders. Ignoring her, Max left.

Genvieve watched as Nick and Hank left before asking Max if he knew what happened to the women. He said that he didn't remember, and when Genvieve insisted on leaving and commented that Hedig was pushing them all too hard, he reached for a drink again. Genvieve snatched it away and shattered it on the floor, causing Max to lose control because of the Umkippen, woge, and knock her down onto the glass, cutting her leg. Hedig and the others came in, and Max gained control of himself and tried to leave. Sid told Hedig that Genvieve was hurt and went to wrap up her leg. Once Max was subdued, Hedig told Sid to find someone to replace the now injured Genvieve.

Once Rosalee was selected as Genvieve's replacement, Sid left Rosalee with Genvieve, and Genvieve told her to get into costume. When Rosalee saw her wounded leg, Genvieve said that she fell on some broken glass and told Rosalee that she didn't want to be there. When Rosalee asked about the Umkippen, Genvieve admitted that all of the performers were suffering from it, but Max, her boyfriend, had the worst case. Ignoring her fears, she told Rosalee to put on her costume for the evening performance.

At the performance, Max lost control of his Wesen side and broke out of his cage before his cue, attacking the other performers and Hedig. Genvieve tried to stop him without success. Hedig made his way into the mirror maze of a fun house to get away from Nick and Hank, but he found Genvieve, Ivan, and Damien waiting for him. They were there to exact revenge on the ringmaster for their mistreatment and for framing Max for murder, with Hedig insisting that he gave them a purpose. Ignoring him, they all woged, and Damien killed him with his Dämonfeuer fire.

Monroe and Rosalee later sent the performers on their way, and Genvieve thanked them for their help and said that Wesen had to look out for each other. 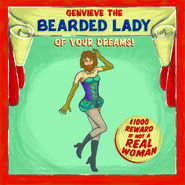 Add a photo to this gallery
Retrieved from "https://grimm.fandom.com/wiki/Genvieve?oldid=137345"
Community content is available under CC-BY-SA unless otherwise noted.