A Genio Innocuo (JEE-nee-oh in-NO-koo-oh; Lat. Genio "genius" + Innocuo "harmless") is a tortoise-like Wesen that appeared in "The Other Side", and it does not have a commonly used English vernacular name. They are rare Wesen known for being shy and reclusive.

When woged, their skin becomes scaly, their face becomes tortoise-like, and blunt claws sprout from their fingers, which are not used as offensive weapons, but for digging. It should be noted that while Genio Innocuo do not gain shells when they woge, they do gain a shell-like scale pattern on their backs which differs from family to family.

Genio Innocuo are notoriously intelligent, compassionate, and thoroughly nonviolent. However, their own genius has been known to do them more harm than good in some cases.

Originally documented in secret by Robert McCormick in his 19th century voyage to the Galápagos Islands, they were seen to be completely unafraid, having never encountered a Grimm before. Unfortunately, the Grimm that encountered them was possibly an Endezeichen Grimm, as McCormick acknowledged they were harmless, but he killed them anyway. The Genio Innocuo were easily slaughtered due to their pacifistic nature. Because of this, they greatly fear Grimms.

Wesen with reptilian features pose a problem in taxonomic hierarchy. I am reluctant to classify them as simply mammal despite the fact that they give birth as a human would. The evolution to scaled skin must be noted.

The Genio Innocuo varies from land versions of the Wesen mainly in the pattern of its scales and back.

Blackened claws apparently useful for digging in sand. Not for self-defense.

Poor posture due to muscular weakness.

Skull features mostly similar to Homo sapiens; however a slitted nostril shows an evolution or departure from Homo sapiens.

Though no shell is present, the pattern appears on the skin and varies by family.
15 September 1833 - Galapagos Islands

On this the second voyage of the H.M.S. Beagñe, I am in the accompaniment of Captain Fitzroy and Charles Darwin on our way to the Galapagos Islands. Darwin has requested my assistance in identifying and documenting the creatures we encounter there.

After sailing around the Islands for two days, we finally embarked and found a gentle race in residence. The most amazing thing about these shy, reclusive groups is that they were not afraid, having never seen a Grimm. I found them to be intelligent, compassionate and thoroughly nonviolent... which made the dispatching of them quite easy. 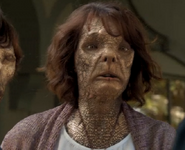 Retrieved from "https://grimm.fandom.com/wiki/Genio_Innocuo?oldid=188124"
Community content is available under CC-BY-SA unless otherwise noted.