Start a Wiki
watch 01:38
'Grimm' Profile: Gelumcaedus
Do you like this video?

When they woge, Gelumcaedus gain thick, pale-green skin. Their mouths extend forward, widen, and become filled with razor-sharp teeth. Their hair and outer ears retract, and they gain sharp claws.

Physically, Gelumcaedus are incredibly powerful, able to tear a man's limbs clean out of their sockets and cause multiple fractures simply by shaking them. Their grip is nearly impossible to escape. They are durable creatures, able to withstand great force. They are also able to move with incredible speed for their large size.

Gelumcaedus are exceptionally hardy and adapted to living perfectly in dark and severely fetid conditions without any noticeable health problems as a result.

Gelumcaedus are commonly known to have dormant periods when they retreat to bunkers fashioned within storm drains and live off of their plunder. One of the oldest known Wesen species, they served in the Praetorian Guard during Caligula's reign and were hired to protect the newly built aqueducts. They carried on in this role throughout Rome's history, and when Rome fell, they retreated into the aqueducts to get away. Some speculate this is why they're fond of storm drains. However, Gelumcaedus are also known to live above ground; Rosalee mentions that in the American South, Gelumcaedus are known to live in swampy marshes, and Gregorek also had a condo in South Florida. ("Cold Blooded") ("Tree People")

Gelumcaedus are an incredibly aggressive and dangerous Wesen that will attack with little provocation, using their powerful jaws and inhuman strength to literally break apart those that get in their way. Their typical way of killing has been compared to Siegbarstes in terms of both brutality and strength.

Their relationship with Grimms is one of both fear and respect. They refer to Grimms by their old Latin name, Dēcapitāre, which means "he who decapitates." Grimms use a weapon called a vambrace that is specifically designed to do battle with and kill a Gelumcaedus.

Gelumcaedus is one of the oldest known Wesen. According to Grimm lore passed down from generation to generation, the Gelumcaedus served in the Praetorian Guard during Caligula's reign.

Having ventured further into the sewers, we were almost overcome by the fumes. It is easy to see why Gelumcedus chose this place to live.

Without the breathing apparatus Anna invented, we could never have survived the fetid conditions.

We were finally confronted by the Gelumcaedus beneath Farringdon Road. The Gelumcaedus had just emerged from a dormant period common for them, during which they retreat into the hellholes they fashion for themselves, living off their plunder.

Even as the Zeppelins rained down fire on the city above, our battle below lasted us the better part of the night.

I WILL NOT BE BROKEN!!! THESE MONSTERS WILL NOT DESTROY ME

It's like I cant go out anywhere anymore. Everywhere I go there they are. A girl I know from the shelter invited me to a party. I finally gave in and went after she begged me.


It was all fun until this guy showed up. He was all into

me until I turned down his advances. Suddenly, he's all freakin out yelling about how I'm a Grimm whatever that means.

Gelumcaedus in the Praetorian Guard 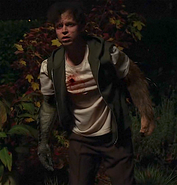