View source
watch 01:23
Wiki Targeted (Entertainment)
Do you like this video?
Play Sound

A Gedächtnis Esser (guh-DAYKHT-niss ESS-er; Ger. Gedächtnis "memory" + Esser "eater") is an octopus-like Wesen that first appeared in "Thanks for the Memories".

Gedächtnis Essers possess an extremely severe woge. They lose all their hair, their skin turns a fleshy pink with a dark maw, and they grow multiple tentacles. Of these tentacles, they have four main ones which are longer than the rest, and each tentacle is covered in multiple suction cups. They use the four tentacles to burrow into the back of their victims' heads to steal their memories; exactly how it works is unknown, but it is theorized to have something to do with the electrical charges of the brain. Victims are left with severe swelling around the hippocampus and other parts of the brain that deal with memory, and they are left with no memory of who they are, in a state similar to advanced dementia. If the process of them completely stealing their victims' memories is interrupted, however, Gedächtnis Essers will still maintain whatever memories have been stolen up to the point of disruption, but their victims will also retain theirs, albeit while being momentarily disoriented, as was seen with both Kent Vickers and Trubel.

Gedächtnis Essers sometimes use their ability to steal memories to take over their victims' identities. Due to their unique skills, they also often work in espionage. It takes considerable effort for them to process these stolen memories. Furthermore, it seems the memories extracted from a Grimm will leave them in a traumatic state, given the violence that Grimms often inflict upon Wesen. Consequentially, they are quite fearful of Grimms.

It is not known how this Wesen removes the memories of its victims, only that it can. I surmise it has something to do with the electrical charges in the brain. After an attack the victims are usually diagnosed with advanced dementia.

From interviewing some of these unfortunate souls, I can see why. This is one of the most heinous Wesen I have ever encountered.

They rob the victims of their very lives by stealing their past and leaving them void of any human connection, devastating to their loved ones, and leaving the victim unable to identify the attack or the attacker. Justice within the confines of the law is therefore impossible.

I witnessed this Wesen attack a woman -- four of his tentacles pierced the back of her skull.

Henry Slocombe's skull after the attack of the Gedächtnis Esser 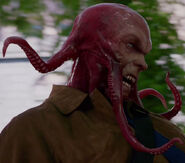