Gabriel Martel is a Luison who appeared in "Cry Luison".

Gabriel's wife, Ava, was worried before going to bed and asked him if he had checked all the bedrooms and doors of their home. Gabriel assured her that he checked them and that she was safe, and upon her request, he promised that "he" wouldn't be there and kissed her on the forehead. He then told her to take her pills and get some much needed sleep.

In the middle of the night, Gabriel was woken up by the sound of shattering glass. He noticed that Ava was not in the bed with him, and he went downstairs. As Ava drove away in her car, he ran after her yelling at her to stop.

Later, Nick and Hank went to the hospital Ava was taken to in order to talk to her, but they could only speak with Gabriel, who informed them that Ava was sedated after she found out the man she hit died. Nick told Gabriel that one of their officers informed them that Ava said she was chased by a wolf, and Gabriel told them that Ava was diagnosed with severe mental illness about six months ago. He told the detectives that she had a psychotic episode the previous night and that before he could stop her, she had ran outside and gotten into her car. Hank then asked him where he was before that, and he said he was sleeping. He continued to say that he blamed himself for what happened because he couldn't get to her in time. He also said that Ava was not supposed to drink alcohol because she was on heavy medication. Nick told him they needed to take a look around their house, and Hank told Gabriel that he needed to come with them.

Back at his and Ava's house, he walked the detectives through what happened as they took a look around. Nick noticed blood on a mat in the house after they entered, and Gabriel said that he believed Ava stepped on broken glass. After they made their way to the kitchen, Gabriel told them that Ava had seen the wolf before and that she described him as a man with a wolf's head who spoke to her. He added that according to Ava, the wolf told her that he was trying to help her and that Ava was terrified. Gabriel said that she first told him about the wolf when she started seeing it six months ago, which was right after they moved to Portland from São Paulo. Hank asked him if it was just the two of them living in such a big house, and he said Ava grew up there and that she inherited the house, adding that the housekeeping staff quit after Ava's problems started because they couldn't handle it. He then told the detectives that with him struggling to establish a medical practice in Portland, he spent most of his time taking care of his wife. Nick then obtained information for Ava's psychiatrist from Gabriel before leaving with Hank.

The next day, Gabriel attended a hearing in court to determine whether he would get control of Ava's estate. Nick was there to monitor him while Monroe went to Gabriel's house to see if he could smell the scent of a Luison, but when Monroe saw someone that looked like Gabriel arrive at the house, he called Nick to ask him why he didn't warn him that Gabriel was coming back to the house. Nick then told Monroe that Gabriel was still at the courthouse.

Later that night with Ava having returned home from the hospital, Gabriel assured her that she was safe because the police checked the house. Ava then took her pills, and she and Gabriel went to bed. Ava woke up in the middle of the night, however, and saw that Gabriel wasn't in bed with her. As she got out of bed to look for him and walked by a room, Gabriel came out from around the corner, woged, and went downstairs to go after her. However, when he got to the kitchen, he found a mask resembling a Luison. He picked up the mask as Nick and Monroe came into the kitchen and confronted him. He told them they couldn't prove anything, but Nick replied that he thought they could as he picked up the mask. Gabriel was then arrested along with his other three quadruplet brothers and led outside in handcuffs. 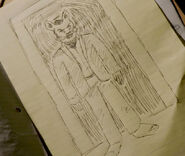 Add a photo to this gallery
Retrieved from "https://grimm.fandom.com/wiki/Gabriel_Martel?oldid=148302"
Community content is available under CC-BY-SA unless otherwise noted.