A Furis Rubian (FYOOR-is ROO-bee-on or FYOOR-is ROO-bee-in; Lat. "red devil" or "red demon," from furia "Fury" or "demonic spirit" + rubrum "red") is a horned toad-like Wesen that first appeared in "The Believer".

In their woged form, Furis Rubians have often been mistaken as the Devil throughout history. In fact, during the dark ages, the Pope helped propagate this mistaken identity by chaining some up in the basement of St. Peter's Basilica, occasionally bringing them out for the general public to see, to instill the fear of Hell into the masses. In their woged form, they lose their hair, their skin gains a red, scaly appearance, their ears become pointed, their fingernails turn black and elongate, and they sprout several horns from their head, with there being two more prominent horns a couple inches in length. Additionally, their eyes turn black, their nose widens, their voice gets much deeper, and their eyebrows turn into several small, black, scale-like horns. There is some color variation, as one Furis Rubian was light brown in color, and not red. ("The Beginning of the End")

They become considerably stronger in their woged form, able to break steel chains and throw men around, though they are still weaker than Grimms. They likewise gain impressive durability as well, able to withstand serious injuries, as Dwight Eleazar was able to keep on fighting after being skewered in the chest by two iron pokers. However, they will succumb to their wounds eventually, just not as quickly as they would in their human state.

Despite their intimidating look, Furis Rubians are not violent creatures, nor do they condone violence either. Normally having a calm demeanor, they only become aggressive as a last resort, typically in self-defense. Some Furis Rubians choose to use their woged appearance for good and attempt to help others through spiritual and religious healing.

They do not fear Grimms, as many other Wesen do, and their reaction to seeing one is more of surprise and awe. Unlike most Wesen, they know Grimms by their old name: Dēcapitāre. 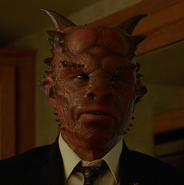 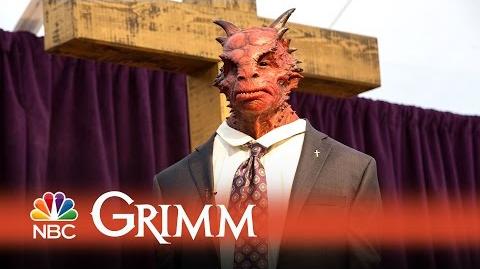 Retrieved from "https://grimm.fandom.com/wiki/Furis_Rubian?oldid=179476"
Community content is available under CC-BY-SA unless otherwise noted.